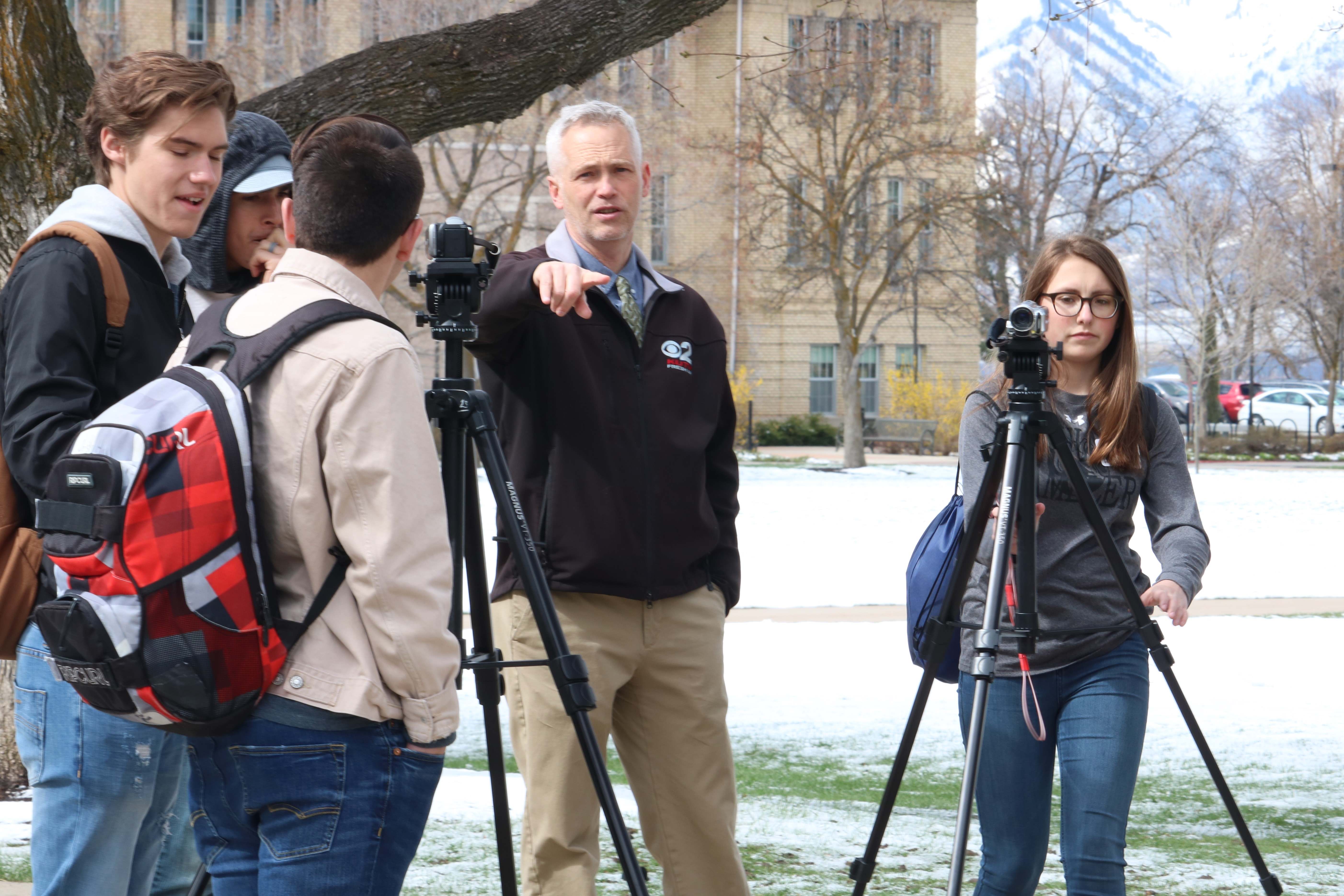 Brian Champagne, professional practice associate professor in the Department of Journalism and Communication, directs high school journalists as they cover a mock car crash on the Quad. 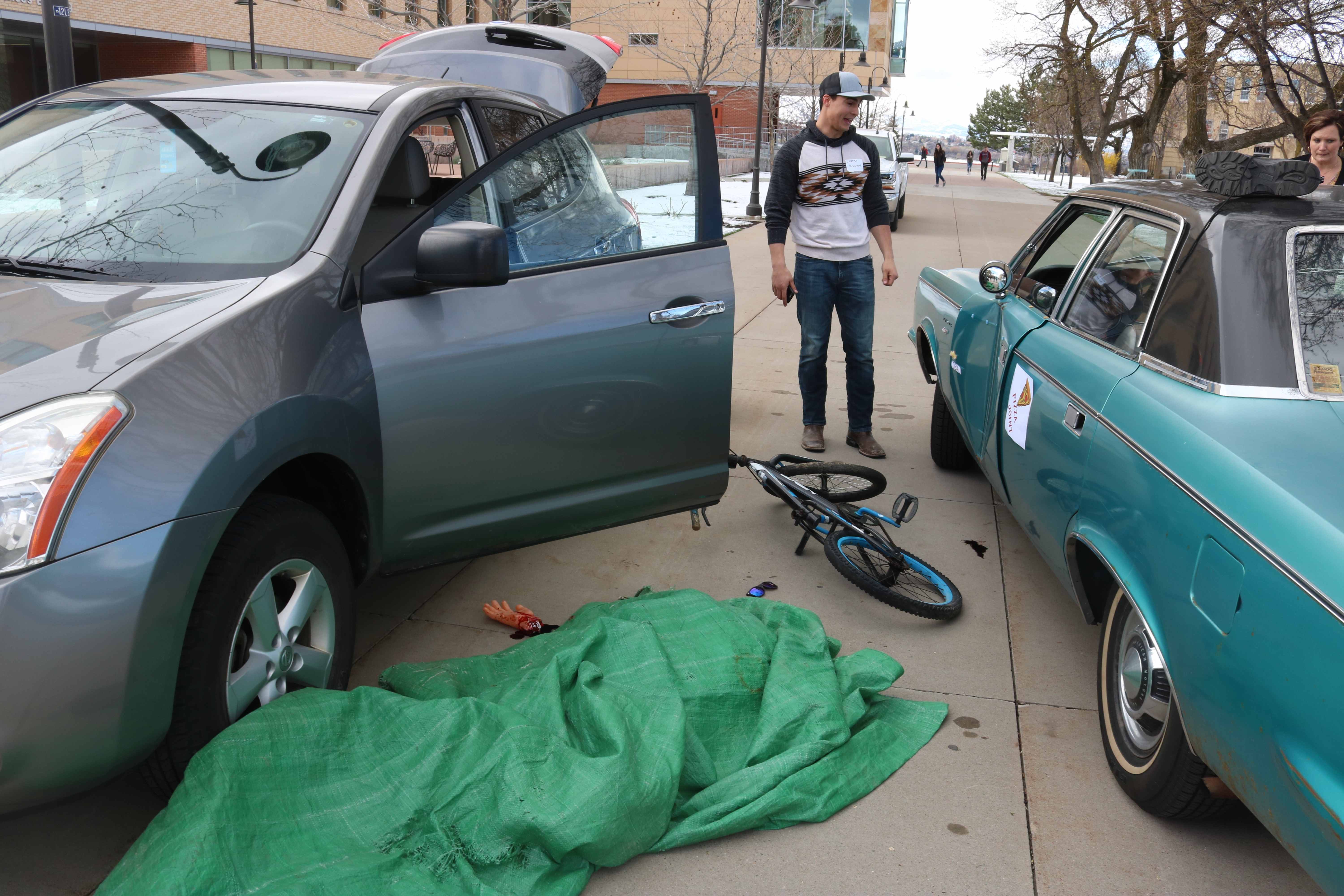 Bronson Teichert, a major in agricultural communication and journalism, surveys the mess he made as a texting pizza guy delivery guy who mowed down a bicyclist on the Quad. It was all reporting fodder for the USU Scholastic Media Awards for high school students on April 13. 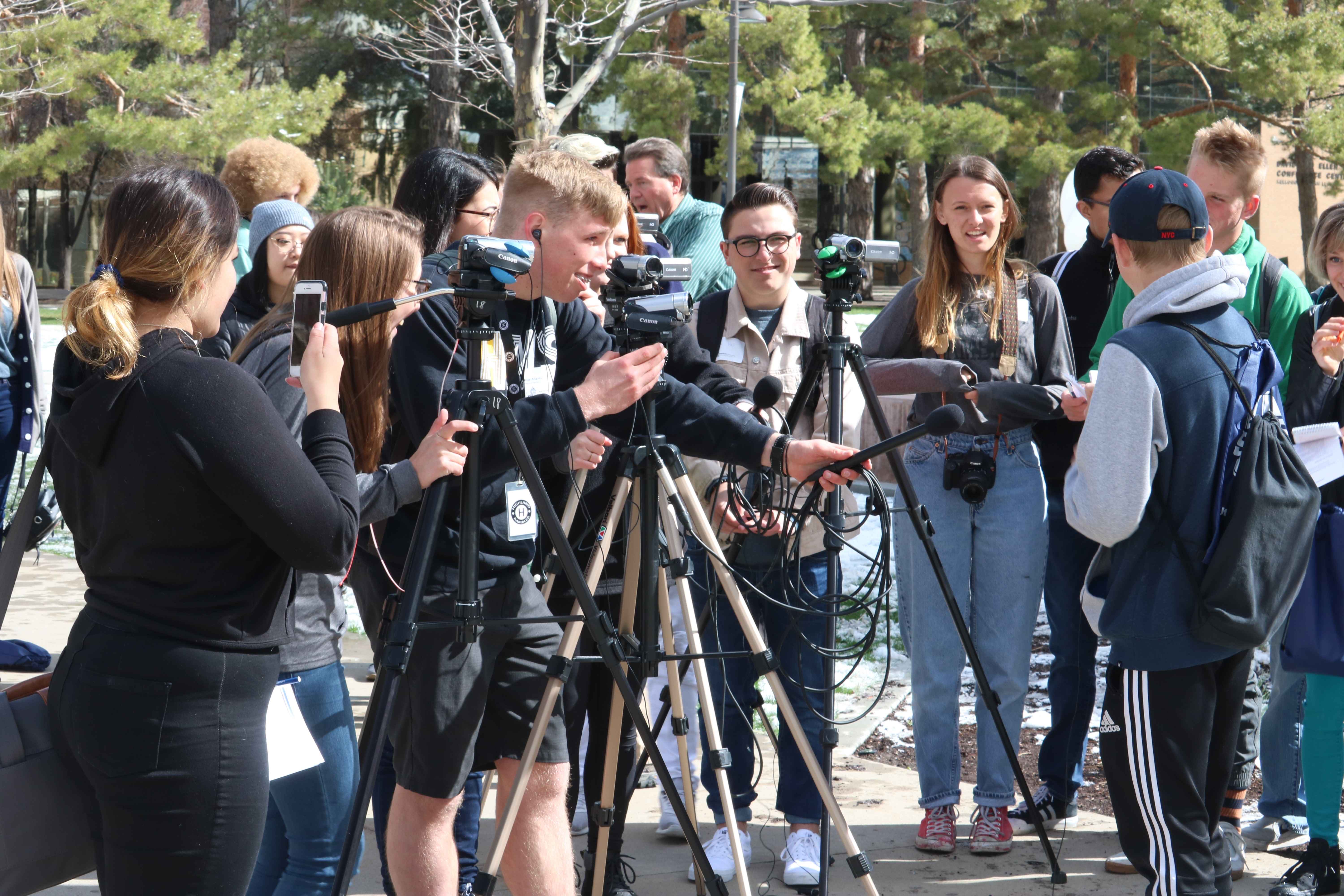 High school journalists swarm around a car "wreck" on the Quad during the annual USU Scholastic Media Awards day April 13 hosted the Department of Journalism and Communication. 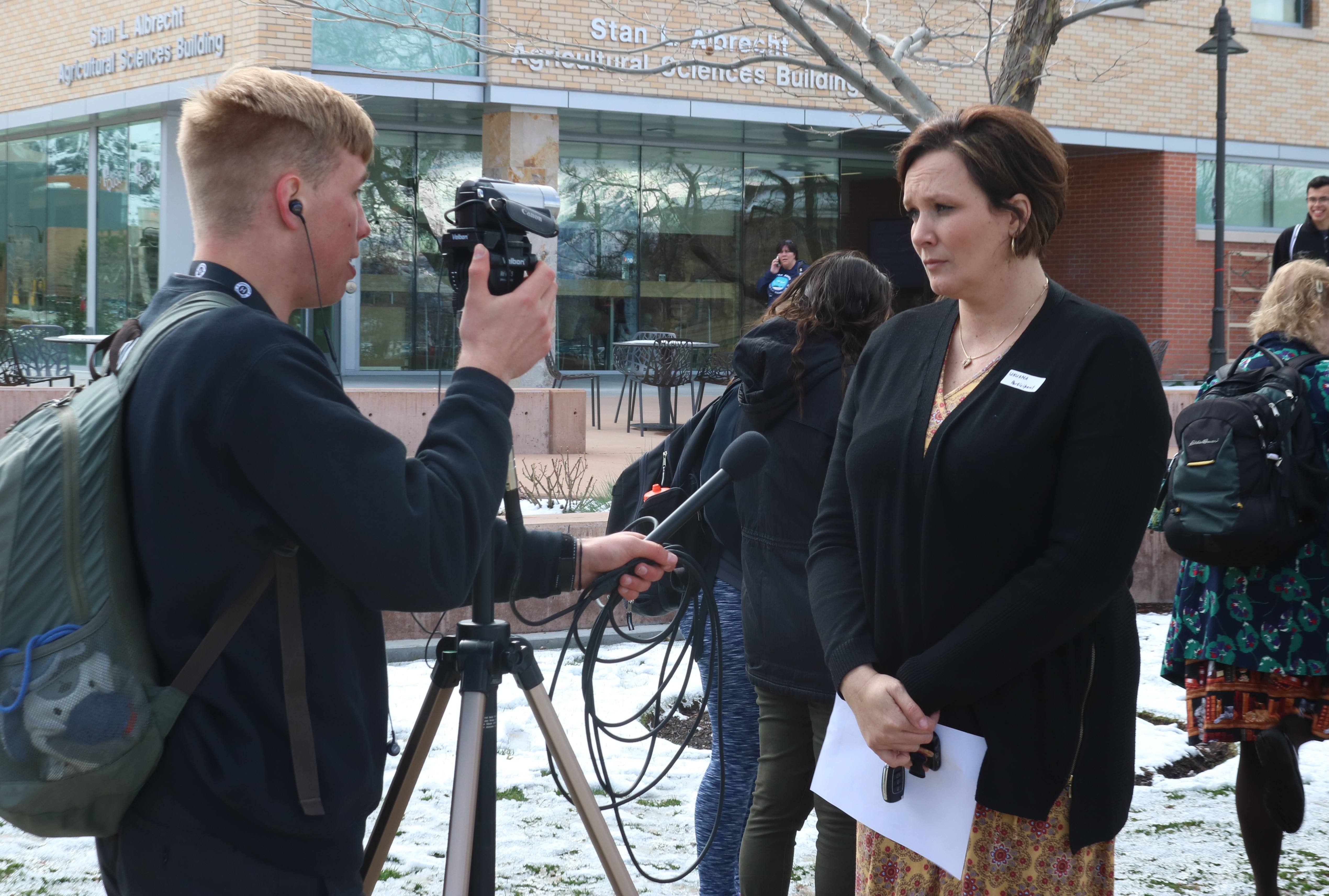 A distraught bystander (aka Deb Phillips, business assistant in the Department of Journalism and Communication) is interviewed by a high school journalist from Highland High School in Salt Lake City.

A calamitous collision on the Quad between a bicycle and a car driven by a pizza delivery guy had left the cyclist dead, now with an ominous and lumpy green tarp covering the body (OK, a big stuffed bear).

The young journalists set right to work. Print journalists held up smartphones to catch quotes from eye witnesses and law enforcement – gamely portrayed by USU Police Captain Tyler Budge. Broadcast students hoisted video camera and microphones. Public relation trainees puzzled over how to explain reports that the guy delivering the pizza had been texting. In later sessions the budding journalists researched data on car crashes and investigated the legal ramifications of their reporting.

All in a day’s work for a blustery Friday the 13th, says Brian Champagne, professional practice associate professor in the Department of Journalism and Communication, which hosted the event.

The event gathered more than 50 high-schoolers from five Utah school. The students received USU Scholastic Media Awards for entries judged by JCOM faculty and students.
At least, Champagne noted, “No one looked bored.”

JCOM students themselves also found themselves on the award-recipient end. The Society for Professional Journalists announced its 2017 Mark of Excellence Awards for the best collegiate journalism.  Winners in Region 9, which includes colleges and university throughout most of the Intermountain West, were presented at a ceremony April 21 in Indianapolis.

Students Alison Berg and Carter Moore claimed first place in the indepth-reporting category for their Utah Statesman stories about the Huntsman School of Business’ non-transparent use of some $8 million in differential student tuition.

Utah Public Radio reporters took the full sweep of awards, beginning with Eric Cox’s “Words from Women who Marched.” In the category of radio feature, the winner was Rhesa Ledbetter with “’They're Built on Love': Raising Children with Williams Syndrome.” Ledbetter was also a finalist with “Crossing Borders: A Mother and her Transgender Son Reflect,” while Bronson Teichert was also a finalist with “50 Years of Rodeo Photography: A Career Behind the Camera.”

Sports column writing: First place went to Logan Jones for his column “Nothing but Respect for Those who Kneel.” Daniel Hansen was a finalist for “On the Flipside of a Storybook Ending: End of the Jalen Moore Era.”

Best all-around television newscast: A-TV News and its staff, finalists. The other finalist was Brigham Young University, with the Metropolitan State University of Denver the winner.