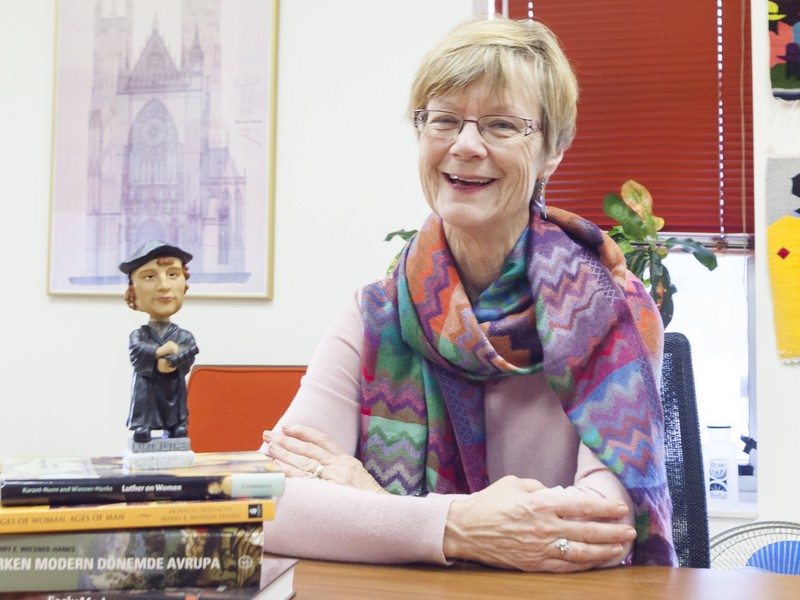 Global historian Merry Wiesner-Hanks opens the Tanner Talks series, “Global Renaissance,” with a public lecture on Oct. 4. She is a professor of history at the University of Wisconsin Milwaukee and an expert in religious and gender culture during the era of the Reformation (with a bobble-head Martin Luther for inspiration).

Mention the Renaissance, and it’s likely that Michelangelo, Leonardo and Raphael (maybe even Donatello) come to mind.

This period of rebirth and enlightenment, however, stretched far beyond the Mediterranean. Scholars in an upcoming series of public lectures will discuss how the Renaissance, a truly global phenomenon, rippled to the shores of Persia, Japan, the New World and beyond.

The Global Renaissance is the title of a series of presentations, hosted throughout this academic year, included in the 2018-2019 Tanner Talks series in the College of Humanities and Social Sciences.

The series opens Thursday, Oct. 4, with a lecture by global historian Merry Wiesner-Hanks, professor of history at the University of Wisconsin Milwaukee and an authority in the history of Renaissance women. Her presentation is titled “To the Ends of the Earth: Religious Transformation in the Age of the Reformation.”

Wiesner-Hanks will begin her day at USU in a mini-global fashion — meeting with students in history, English and languages classrooms. She’ll then speak publicly at 4:30 p.m. in room 046 of the Eccles Science Learning Center.

All lectures in the annual Tanner Talks series, endowed by the O.C. Tanner Foundation, are free and open to the public.

The Global Renaissance series was organized by Felipe Valencia, an assistant professor of Spanish and director of the Medieval and Early Modern Studies program in the Department of Languages, Philosophy and Communication Studies.

Valencia noted that a recent trend in medieval and Renaissance studies is to underline the impact of the Renaissance as a “larger process around the globe.”

In Central Asia, three large Muslin empires hobbled their war machines and began to reach beyond their borders just as they saw transformations in religion and art; China and Russia also expanded their reach, he said. “It really was a renaissance in all parts of the globe.”

So that explains why the series’ speakers include one of the nation’s foremost authorities on Persian literature, as well as an expert in early Spanish contact with Japan and the religious cultures of the Spanish Philippines.

The first speaker, Wiesner-Hanks, will discuss her research, which is indeed global in scope. She edits the Journal of Global History, as well as the Sixteenth-Century Journal. She’s also the editor in chief of seven-volume Cambridge World History series published in 2015. She sums it all up as author of A Concise History of the World (Cambridge, 2015).

“We knew it happened, but it wasn’t much on everyone’s radar,” he said. “We’re going back to the archives to show, for instance, that the Spanish and the Portuguese had a lot of contact with the Japanese in the 16th century before Japan shut Europeans out for a couple hundred years.”

Princeton’s Lee, he added, is an expert in early interactions between Spain and Japan and the Philippines “and what trade and cultural exchange happened in that period.”

Losensky is “one of the greatest scholars of Persian poetry in the United States,” said Valencia. “It will be very illuminating for all of us to find out what was happening in Persia — this huge multinational empire in the middle of Central Asia — at the same time Shakespeare was writing.”

As for Ramachandran, her book The Worldmakers (University of Chicago Press, 2015), explores a concept that today we take for granted: the world, imagined as a whole.

Global Renaissance speakers were chosen with input from the nearly 20 faculty members across humanities disciples whose classes apply to the Medieval and Early Modern Studies certificate program, Valencia said.

Plus, “we looked for speakers who would be relevant for specific courses to be taught next year,” he said. In spring semester, for example, Danielle Ross, assistant professor of history, will use poetry by the 12th-century Persian poet Attar of Nishapur in one of her classes, and she will invite Losensky to lead a discussion with her students.

Valencia said allowing students to meet with and question renowned scholars gives them a vision of their own potential. “When a great researcher presents their research, students see, ‘Oh, this is what you can do with this, this is where my education can lead,’” he said.

Such “high academic discourse” is important even for students who may be frustrated with their ability to understand, he said.

“As someone who’s been in school for so many years, I’ve learned the only way to get better at understanding complex discourse is to be exposed to it,” he said, “even if at the beginning you don’t understand a thing.”

For times and locations of all Tanner Talks, visit http://chass.usu.edu/the-college/tanner-talks.