The 'Connected World' of Shakespeare's era is focus of new exhibit 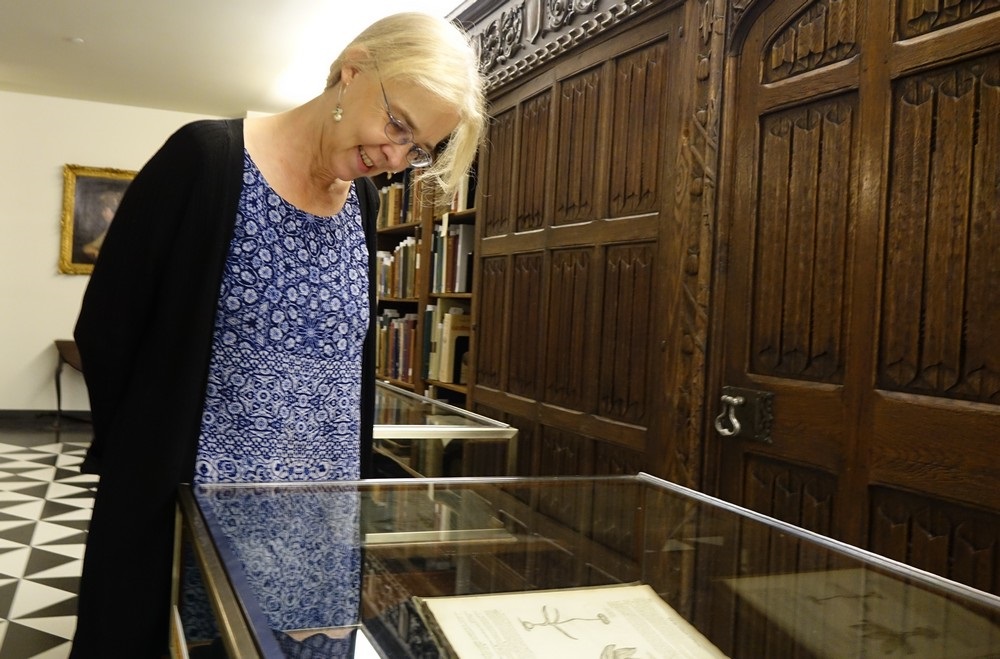 English professor Phebe Jensen previews an exhibit curated by students who focused on Shakespeare's understanding of the medical practices common to his era. "Secrets: Shakespeare and the Connected World" runs through Jan. 5 in the basement of the Merrill Cazier Library.

Secrets: Shakespeare and the Connected World” exhibit
Through Jan. 5, 2019
Locations Lower level of the Merrill-Cazier Library, in Special Collections
Hours: The portion of the exhibit in the Hatch Room follows Special Collections hours: 9 a.m.-5 p.m. Monday, Thursday and Friday; 9 a.m. to 7 p.m. Tuesday and Wednesday; and 1-4 p.m. on Saturday.
Cost: Free and open to the public.

We take Tylenol today not so much because we believe in it, but because it’s an accepted medical and scientific remedy.

So when Petruchio tried to cool Katherine’s hot temper in “The Taming of the Shrew,” he refused to let her eat hot foods. That may be odd to us in the 21st century. But Shakespeare’s character was simply reaching for the bottle of aspirin.

In a new exhibit at Utah State University’s Merrill-Cazier Library, students studying English have looked at Shakespeare’s plays from a different angle: that of the scientist.

“Secrets: Shakespeare and the Connected World” continues through Jan. 5, 2019, on the lower level of the library. The exhibit showcases panels describing the cosmology of Shakespeare’s time and then moves into the Special Collections & Archives for a display of 17th-century medical books.

Students of English 6430 (Rare Books and Shakespeare) curated the exhibit after a semester-long deep dive into early modern concepts about science and medicine and how they fit into the era’s literature, said instructor Phebe Jensen, a professor of English.

The resulting exhibit raises such questions as: Did Macbeth suffer from an overabundance of black bile, and was that what seeded his murderous ambitions? And what, exactly, were those witches brewing?

The exhibit’s title describes how Elizabethans looked at their world, said Jensen. They saw connections between the stars, the moon, their landscape and their own bodies.

“For them, this is a theological principle,” said Jensen. “Everything is connected through the mind of God, and it’s a purposeful connection. And what human beings do is try to find those connections.”

Making connections was also the goal of Jensen’s students, a group of graduate and undergraduate students. Graduate student Shaun Anderson, for instance, noted that the unusual perspective “just brought a whole new aspect to the reading and study of Shakespeare.”

Plus, he added, “it makes some of it even make more sense.”

Also, for a territory as large as that left by perhaps the world’s greater writer, the focus on cosmology offers a home base. “What I find most beneficial is that the context gives a jumping-out place because Shakespeare is so big and difficult to tackle,” said Anderson. “Understanding the context he was working within — where the whole world is connected — helps you make connections as well.”

The exhibit looks at elements within four plays: “The Tempest,” “The Taming of the Shrew”, “Macbeth” and “Romeo and Juliet.”

Those four elements — blood, black bile, yellow bile and phlegm — correspond to human qualities. Katherine, for instance, suffered from an overabundance of yellow bile and was therefore bold, angry and quarrelsome. Macbeth’s melancholy could find its source in black bile.

The exhibit continues into the Special Collection’s Hatch Room, which within its rich, Tudor-like walls contains a large collection of Elizabeth published works. Indeed, the collection includes a portion of Shakespeare’s Second Folio of 1632.

Jensen’s researchers scanned the “self-help” books of the day and the writings of 16th century scientists. Their conclusion are on display, along with the books themselves.

Does such an exhibit diminish Shakespeare’s universality and authority? After all, he describes an herb  — a still unidentified plant he called moly — that sent Romeo into a pretty convincing death coma.

“Shakespeare had such a bead on human nature that we don’t need to know all this stuff to understand Shakespeare,” said Jensen. “But it does deepen and enrich your understanding and it opens your mind to different ways of thinking.

“Secrets” is available to see anytime the library is open. However, the portion of the exhibit within the Hatch Room follows Special Collections hours: 9 a.m.-5 p.m. Monday, Thursday and Friday; 9 a.m. to 7 p.m. Tuesday and Wednesday; and 1-4 p.m. on Saturday. It is Free and open to the public.