'No turning back now' with groundbreaking of writers and artists' retreat 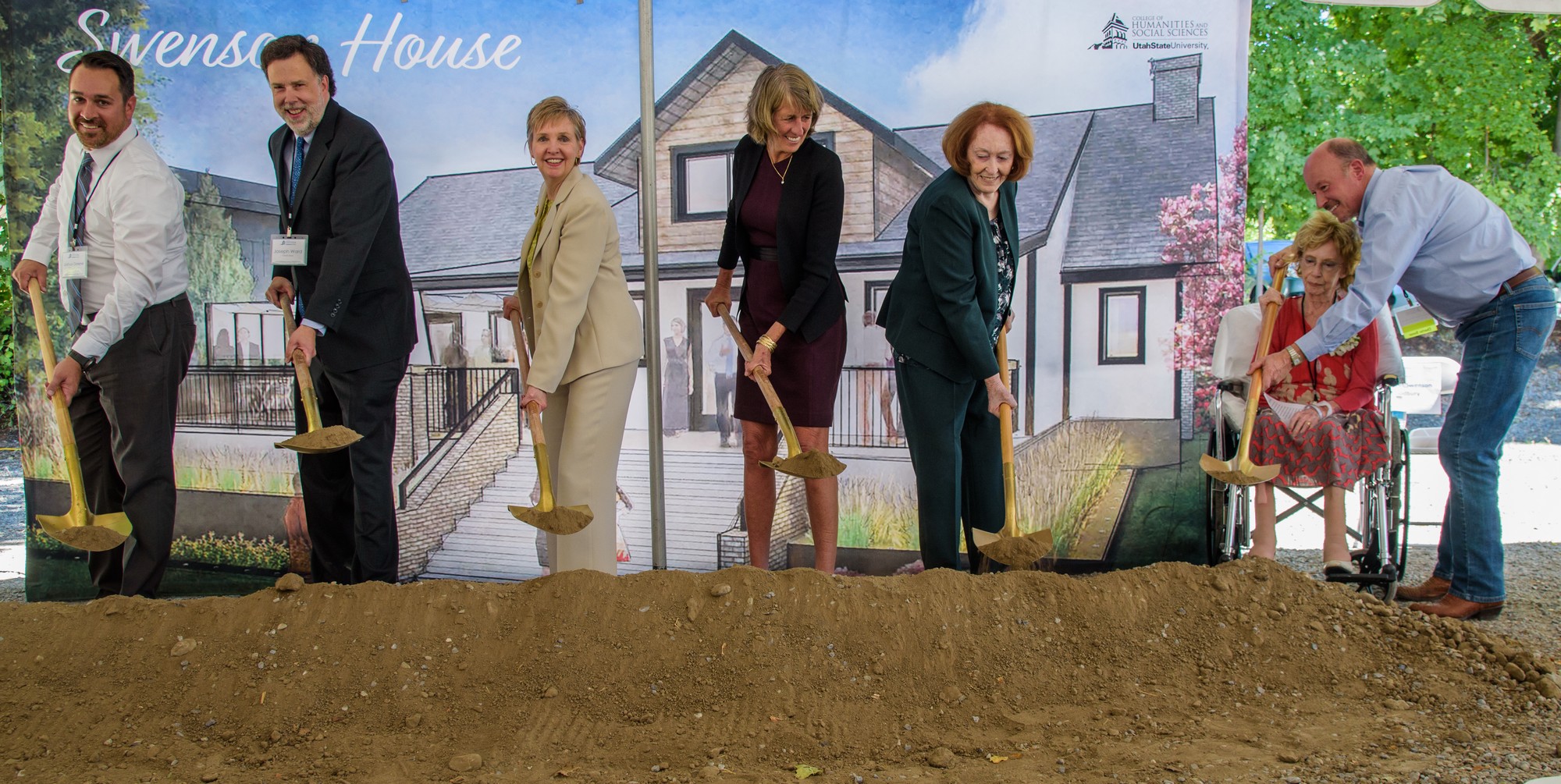 More on the Swenson House, its structure and timeline

LOGAN, Utah -- When Dan Swenson built a home for his family in 1922, his inspiration and guidance came from a set of house plans ordered from a catalog.

The bungalow that once stood at the base of Old Main Hill nurtured 10 siblings who would all go on to leave their mark on the world, though none as articulately and wide-spread as the eldest child, poet May Swenson.

The home was demolished nearly 40 years ago. But on Tuesday, an enthusiastic audience gathered on the now-vacant lot to break ground for a new incarnation of the Swenson family home. Inspiration for this reimagined and updated Swenson House comes from the Utah State University literary community and the Swenson family itself. The future building will provide a nurturing space for writers and other artists and a gathering place for community members, said Joe Ward, Dean of the College of Humanities and Social Sciences.

Perhaps the building will “foster the next May Swenson,” Ward told the group of nearly 100 people. “We hope  that this is where our next May might feel the first flash of insight as she or he sits in the audience” of a public reading, workshop or other gathering.

The Swenson House will offer a main event space, a conference room, cozy reading nooks and a Swedish-themed coffee shop to be named Greta’s Kitchen in honor of the family matron. Future plans call for recreation of Dan Swenson’s famed and lush gardens, as well as a patio area and cabins for visiting writers.

This event has been a long time coming, said Richard Eyre, a nephew of May Swenson and one of many Swenson family members in the audience. “So we’re thrilled,” he said. “Once the ground is broken, that means we’re at the point of no return.”

Construction will begin in earnest this spring, with completion of the 6,000-square-foot building expected in 2020, said Ward.

May Swenson, who died in 1989, is considered one of the most influential American poets of the 20th century, said Paul Crumbley, an English professor and scholar of the poet’s work. She’s renowned, he said, for her “keen metaphysical insights gleaned from her observation of ordinary human rituals and engagement with the natural world.” 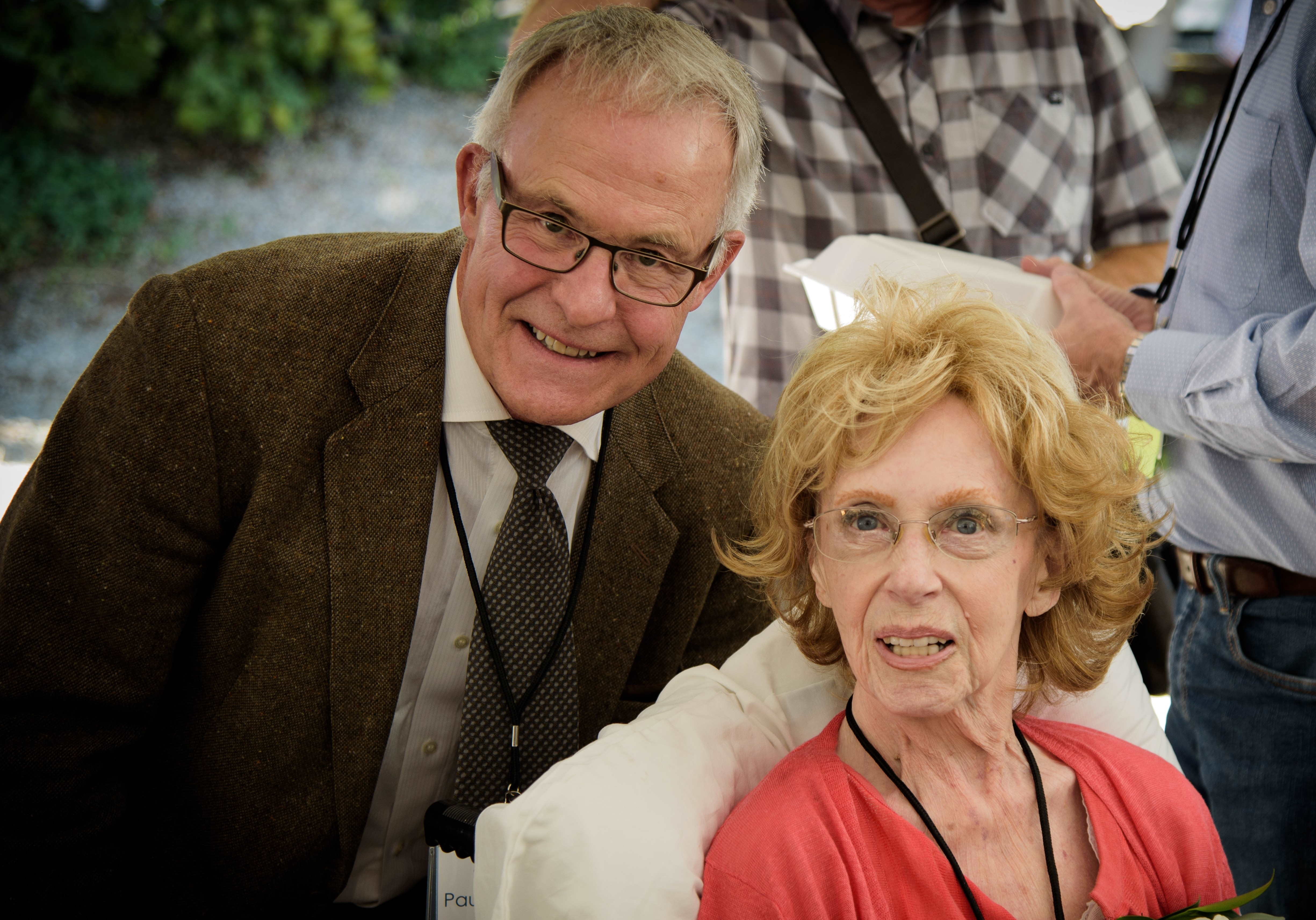 Paul Crumbley, an English professor and scholar of poet May Swenson's work, with Margaret Swenson Woodbury, May’s youngest sister and only surviving member of her immediate family, at a Sept. 18 groundbreaking for the new Swenson House.

Eyre sees the home representing, however, the entirety of the family created by Dan and Greta Swenson, who immigrated from Sweden near the turn of the 20th century. “I hope we get the broader vision of this marvelous Swedish immigrant family and how diverse and multi-faceted they were.”

Eyre’s grandfather, Dan Swenson, began his teaching career at the then Utah Agricultural College in 1912. He taught harness repair, woodworking and “fancy furniture” making, and his craftsmanship was reflected in family life. In one poem, May Swenson describes her father’s creation of “my little desk of cherry wood where I wrote my first poems.”

Dan Swenson, says Eyre, was “a Renaissance man” whose curiosity, innovation and humor were evident in all his ventures, including his then-famous garden. The orchard, remembers Eyre, included one particular apple tree on which Swenson had grafted nearly a dozen limbs. In fall, 10 different varieties of apples were harvested from the single tree.

The kitchen was the favorite refuge for another Swenson grandson, Kevan Eyre of Logan. “I can close my eyes and still see the linoleum,” he laughs. The kitchen’s counters, he adds, stood at a height of just 30 inches to fit his petite, 4-foot 10-inch grandmother. Greta’s famed cardamom sweet rolls will be a feature of the small café.

Ward, the CHaSS dean, told the gathering the College of Humanities and Social Sciences is honored by the responsibility of maintaining the legacy of May Swenson, a 1934 English graduate of USU. The future Swenson House will be funded largely by private funds.

USU President Noelle Cockett told the group she was especially influenced by a comment from Dean Ward, who told her, “Our faculty don’t need laboratories and equipment. They need space and time,” she recalled. “That’s the goal with the Swenson House.”

The future building, she added, will enable USU to “share our learnings and discoveries in the humanities through engagement with the community. This is an important moment in the Cache Valley’s literary and cultural history.”