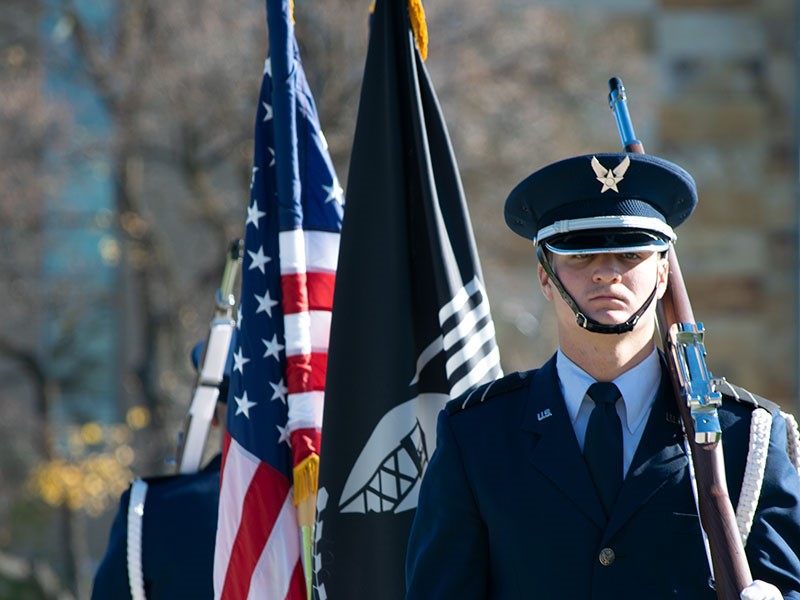 Cadet Skyler Lloyd marches in the 2017 POW/MIA Vigil, an annual 24-hour-long remembrance of veterans by the U.S. Air Force ROTC at USU. This year's vigil is Nov. 8-9 on the Quad.

Only the sharp tick of clicking heels can be heard. Dusk. Midnight. The steady cadence carries on through pre-dawn, rush hour and high noon, for a full 24 hours.

For more than three decades, this annual ritual performed by cadets in USU’s Air Force ROTC has offered a powerful reminder of the meaning of often-neglected Veterans Day. This year’s vigil  carries additional gravity as Americans mark the 100-year anniversary of the armistice that ended the “war to end wars,” as it was hopefully called a century ago.

A bugle playing Taps will start the POW/MIA vigil at 5 p.m. Thursday, Nov, 8. It continues through 5 p.m. the following day, Friday, Nov. 9. It all takes place at the heart of the USU campus, the sidewalk center of the Quad.

This year’s vigil is organized by Cadet Nicholas Palmer, a senior from Riverdale, Utah, who, as a member of the ROTC Honor Guard, presents the flag at sports game and other gatherings. In those cases, the audience stands in acknowledgment. Not so for the vigil. One year, he remembers, he was assigned one of those lonely, wee-hours slots.
“Not many people come out then, but it’s still a very …” he pauses. “Just the quietness. It’s great reflection time.”

The vigil also invites all Americans to reflect on our military forebears — not only Air Force, says Palmer, but every soldier, every war. “It’s the entire military we’re honoring,” he says.

Small U.S. flags will be available for bystanders who’d like to leave their own remembrance. By the end of each vigil, the Quad’s lawn is a field of red white and blue.

Palmer and other marching cadets must keep their eyes trained forward. “But I’ve had a few people come up and whisper ‘Thank you,’” he said. “People sit there and just watch. It’s a reflection time for them too, to show their appreciation for everything the military has done.”

Specifically, the uniformed marchers will be honoring America’s prisoners of war and those soldiers still considered missing in action. As part of his duties as Vigil Officer, Palmer conducted his own research. He learned that from World War II, continuing through the Korean War, Vietnam War, Cold War, Gulf War and other conflicts, some 82,000 U.S. troops remain missing in action.

Nearly 75 percent of that number went missing in the Indo-Pacific theater of World War II, according to the Defense POW/MIA Accounting Agency.

Vietnam alone still has more than 1,500 soldiers unaccounted for. About half of the 82,000 number are believed to have been lost at sea.

“I just think of them and everything they gave,” Palmer says. “We still don’t know what happened to the ones whose bodies weren’t found. That’s 80,000 families that don’t have closure.” 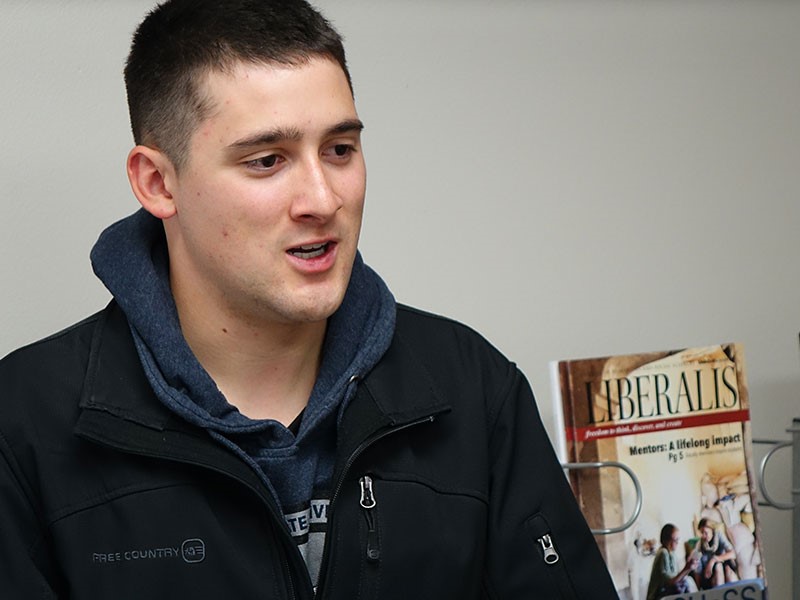 Air Force ROTC Cadet Nicholas Palmer is the Vigil Officer in charge of organizing the 2018 POW/MIA vigil taking place on the Quad Nov. 8-9.

Detachment 860 of the AFROTC based at USU has seen unprecedented growth in the last few years, said Maj. Damon Smith, the detachment’s operations flight commander. This semester’s roll includes 140 cadets. Most will finish the four-year program, earning both a bachelor’s degree and a commission as a brand-new second lieutenant. Palmer himself will be commissioned this spring and has been accepted into pilots’ school, though he won’t know his assigned aircraft until well into his flight training.

Because of the increase in AFROTC ranks, cadet participation in the vigil has doubled. In previous years, two cadets made their respectful hour-long rounds. For 2018, a quadruplet of cadets will march at a time, involving a total of about 80 cadets, said Smith.

The bystander’s takeaway of a smooth, disciplined march is the cadets’ goal, said Palmer. “How this thing works is everyone has to be in sync,” he said.

Cadets must count their steps and their seconds and can’t glance at their partners for a cue. Instead, said Palmer, they listen.  “If you only hear one heel click because everyone has clicked their heel at the same time you do,” well, that’s synchronization.

“It’s the only communication you can really have,” he said. “It takes a lot of focus. It takes a lot of just discipline, making sure I’m on step with the person next to me. If I don’t get it right, go to the next one and try again.”

Not every second is spent counting, and Palmer says the cadets have plenty of time for self-examination.

“It’s just an interesting reflection period. ‘Why am I here?’ ‘Why did I sign up to serve?’ ‘How is this helping me get a better understanding of everything the military and flag represents?’”

He pauses. “And all the people who didn’t come back.”

Writer and contact, Janelle Hyatt, communications director for the College of Humanities and Social Sciences, Janelle.hyatt@usu.edu, 435-797-0289.

For a video of a previous year’s vigil, see facebook.com/chassusu