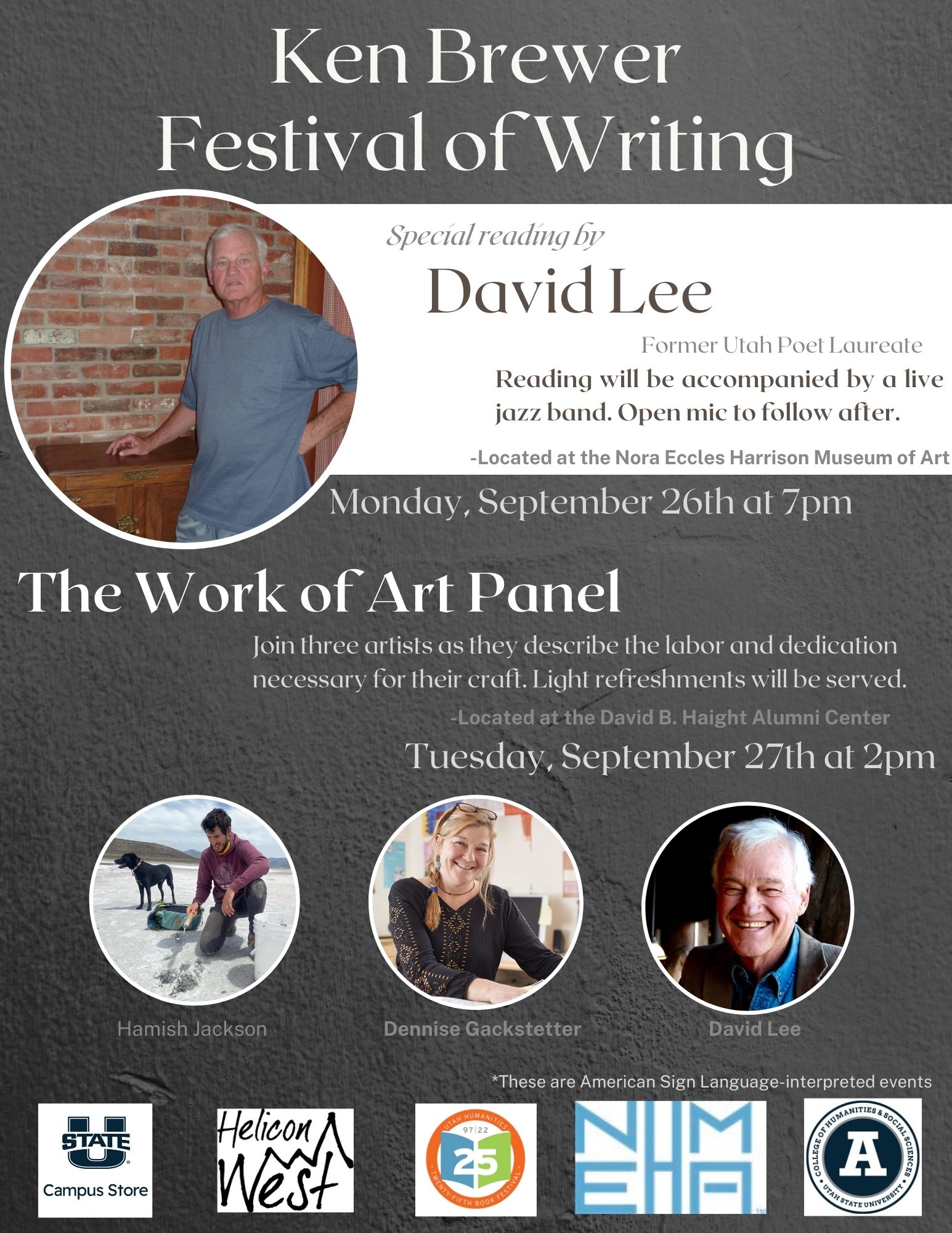 The first of two Ken Brewer Festival of Writing events will take place on Monday, September 26 at 7 p.m. at USU’s Nora Eccles Harrison Museum of Art, featuring poetry readings, a live jazz ensemble, and an open mic. The main event will be a reading by writer David Lee, who is the author of several poetry collections.

Ken Brewer was a USU professor of English from 1968 to 2000, and the author of eight books of poetry and over 300 individual poems that he published in literary magazines around the country. In 2003, Ken was named Utah Poet Laureate, and he used his role to promote poetry readings around the state. Over his long career as a teacher and writer, Ken encouraged thousands of Utahns to find their voice and to read their poetry out loud. This celebration honors that tremendous legacy by doing what Ken himself loved best.

Born in west Texas, David Lee is the author of numerous poetry collections, including The Porcine Legacy (1974), Driving and Drinking (1979), The Porcine Canticles (1984), Wayburne Pig (1997), News from Down to the Café: New Poems (1999), and A Legacy of Shadows: Selected Poems (1999). Lee has been a boxer, pig farmer, seminary student, cotton mill worker, and the only white baseball player for a Negro League team. He received a PhD in literature, with a concentration in the poetry of John Milton, from the University of Utah.

David explores the interaction of humans and the natural world in his poetry, depicting rural landscapes and lives and often employing a rural American dialect. His collection So Quietly the Earth (2004) portrays the lands of the American Southwest.

David has received grants from the National Endowment for the Arts and the National Endowment for the Humanities. He won the Mountains & Plains Booksellers Award in Poetry and the Western States Book Award in Poetry. The first poet laureate of Utah, David received the Utah Governor’s Award for lifetime achievement in the arts. He taught for many years at Southern Utah State University.

Join David, along with writers Hamish Jackson and Dennise Gackstetter, for “The Work of Art” panel, which will be held on Tuesday, September 27th at 2 p.m. in the Haight Alumni Center. These three artists, who work in three different media, will describe the labor and dedication necessary for their craft. They will share their work as well as the “ten thousand hours” that brought them there. Light refreshments will follow.

These annual events have been made possible by a generous gift from Glenn and Anne Wilde, who were friends and colleagues of Ken’s at USU. Glenn taught writing for the English Department and English as a second language, and was instrumental in building the university’s extension programs, having each week for years flown between Logan and Vernal in a tiny airplane to teach roomfuls of eager students at the then recently opened USU Uintah Basin campus. Later, Glenn served as Dean of Library and Learning Resources for the College of Humanities, Arts, and Social Sciences, precursors to today’s USU Extension and CHaSS. Anne spent her career at USU in administrative support, was an early folklore contributor to USU’s Fife Archive, and is an active writer of family histories.