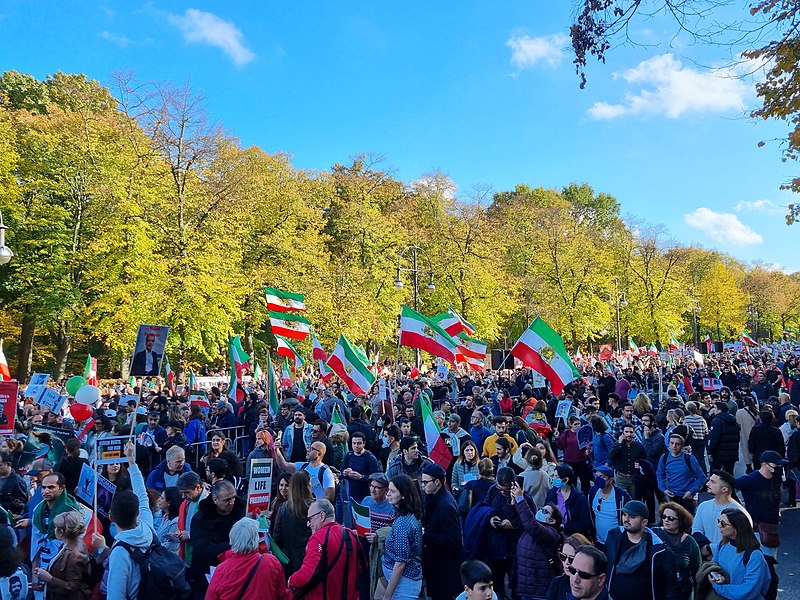 Protests in solidarity with Iran in Berlin, October 2022. Source

Hailey Brown - Anti-government protests in Iran have continued for over two months since the death of a young woman in custody of the Iranian police. One such protestor, Masoud, was wounded by metal pellets shot at demonstrators by Iranian security forces. His decision to join the protests came after a realization of the grim reality of life in Iran under dictatorship and a desire to change Iran for the better. His actions have led to a change in his sense of identity.

Identity is the relationship people have to their home, or the place where they live. Those protesting have a negative sense of identity, shaped by the injustices they see in the Iranian government's treatment of their fellow citizens and the way life is in Iran. Participation in the ongoing demonstrations puts Iranians in danger of going to prison, a sentence some, like Masoud, think will leave them at risk for greater harm. This has caused protestors to flee, shedding their sense of identity and connection to their home of Iran. Masoud crossed over to Iraqi Kurdistan to seek refuge from the government. In a quote to the New York Times, Masoud said, “I don’t know whether to cry or what to say. I lost everything that I had. I have no family, no country.”

As protests continue and more people flee, Iran’s sense of place in the region and the world shifts. Masoud now lives with Komala, the Kurdish party that helped him flee Iran.  He calls them his “new family,” though he does not feel the same sense of connection to the group as he once felt for his home country of Iran. As protests continue, many Iranians unite across a new shared identity, one evolved from dissatisfaction with their government. Those who flee may find new sources of identity. Whether this will change Iran’s political structure and its sense of place remains uncertain.