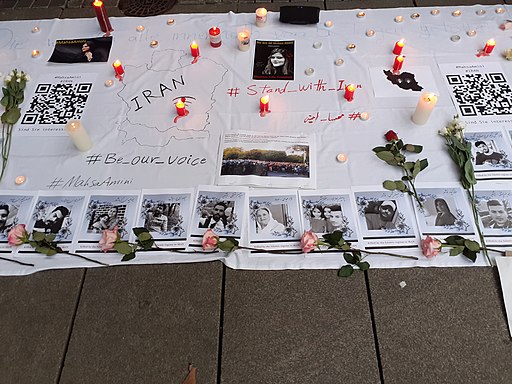 A commemoration in Germany of those killed in the Iranian protests Credit: Ideophagous

Anna Johnson - Widespread demonstrations in Iran have led to civilian deaths, destruction, and general unrest. The catalyst of these anti-goverment protests is the death of an Iranian woman. Mahsa Amini died in police custody after being arrested by Iran’s morality police for improper attire - a vague term that could mean anything from too form fitting clothing to hair showing from under a head scarf. The initial protests following her death were mainly organized and attended by women. Their complaints focused on the morality police and their increasingly hardline stances, but in the days since, the protests have expanded to include Iranians of many different identities protesting everything from government corruption to economic instability.

Identity is how people view the place in which they live or their sense of attachment to their “hometown.” For many Iranians, identity is formed through ethnic and social attachments. Past protest movements targeting corrupt election systems and economic troubles have largely occurred along ethnic and social lines, with only one group actively participating in the demonstrations. The current protests, however, cut across lines of ethnicity and class and have united ethnic minority populations like the Kurds and Turks, as well as rich and poor Iranians. Outrage over Amini’s arrest and subsequent death, fears of growing economic uncertainty and a loss of confidence in an aging and ailing government have pushed through existing divides in Iranian identity, uniting them against a government they see as illegitimate.