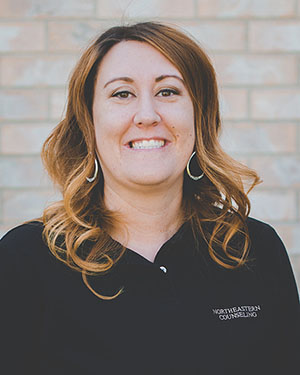 The United States Justice Department estimates 1 in 15 children are exposed to domestic violence each year, and USU alumnus, Catherine Jurado, knows exactly what witnessing this violence does to children.

Jurado began working on her master’s degree in social work in 2008, after
receiving a bachelor’s degree in psychology from Westminster College.

Jurado said she knew from an early age she wanted to help people, and she saw social work as her opportunity to make that happen.

“There are tons of fields that help society,” Jurado said. “There’s medical personnel, law enforcement, and school teachers. But coming across social work, I realized this field would allow me to make a difference in someone’s life, especially kids.”

Jurado was very passionate about helping children, and giving them a voice. As part of her practicum, she and fellow master’s-degree student, Andrew Purcell, began working at the Women’s Crisis Shelter in Vernal, Utah.

There she saw how witnessing domestic violence impacts children.

“I started to notice the lifelong consequences of witnessing violence,” Jurado said. “These children were at higher risk for depression and anxiety, and they were performing poorly in their academics.”

Jurado said one reason kids have these risk factors is because it’s a burden to carry the secret of domestic violence.

Seeing the impact of domestic violence on kids, Jurado and Purcell, created SOAR, a group therapy program for children to let go of the secrecy.

SOAR, which stands for Stamping Out Violence and Rage, allows kids to socialize, connect in healthy ways, and learn how to cope with the problems around them. The group typically consists of five to six children who attend weekly meetings for three months.

“To have twenty or thirty kids in a group would not be productive,” Jurado said. “By having a smaller size, children can learn from and interact more with each other.”

The SOAR program began in 2010, but after seeing its success, Jurado was able to implement it at the Northeastern Counseling Center, her current workplace.

She now oversees the program, while fellow Aggie, Paula Jones, works directly with the children.

Additionally, being able to learn at one of Utah State’s 32 Statewide Campuses was a huge benefit to her. “I was working and going to school at the same time,” she said. “It just worked out well, and I believe I received the same educational quality at a regional campus as my Logan peers. I don’t think my education was compromised whatsoever.”

Read about the SOAR program