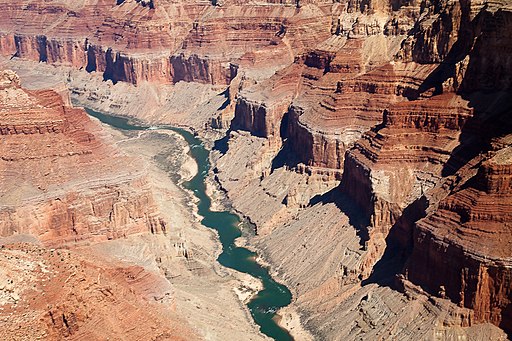 The Colorado River in Arizona

Anna Johnson - With global climate change contributing to longer, hotter summers, the drought in the American West has led to more than just wildfires - it has sparked fiery debates among water managers in states along the Colorado River. The network of Colorado Basin states, reliant on the river to fuel their water supplies, spans the upper basin states of Colorado, Utah, New Mexico and Wyoming, and the lower basin states of California, Nevada and Arizona. These states, while unique in their water needs and specific environmental conditions, are each part of a deeply connected network that must address major concerns over water use.

A network is a collection of individual nodes that are linked together. In this case, we can see each state is its own node connected to each other through a shared reliance on the Colorado River. Other nodes within this river network include federal government agencies, Native tribes with rights to the river, and other individuals who live along its banks. Their shared connection to the river complicates water management by expanding the network of relationships to include non-state entities and interests. Long-term droughts and changes in the surrounding climate are putting pressure on the nodes of this network. The network must act in cooperation despite competing interests. Though separated by state boundaries, the goal of each state in this network is the same; to provide adequate water to its constituents while balancing the interest of other network actors.

The nodes of the Colorado River network must work together to create a plan to address changes in the river’s flows and water level as climate models predict more heatwaves ahead. States must consider the intertwined scales of individuals, communities, the region and the globe. Global climate change could not be larger in scale, literally affecting every aspect of the collective human network from economics to agriculture. While international action on climate change may be slow to come, the Colorado River network has the resources and ability to overcome boundaries of communication between state and non-state network actors to address, to some degree, the problem of water access in the American West.