An Interview with Guadalupe Marquez-Velarde and Seth Archer 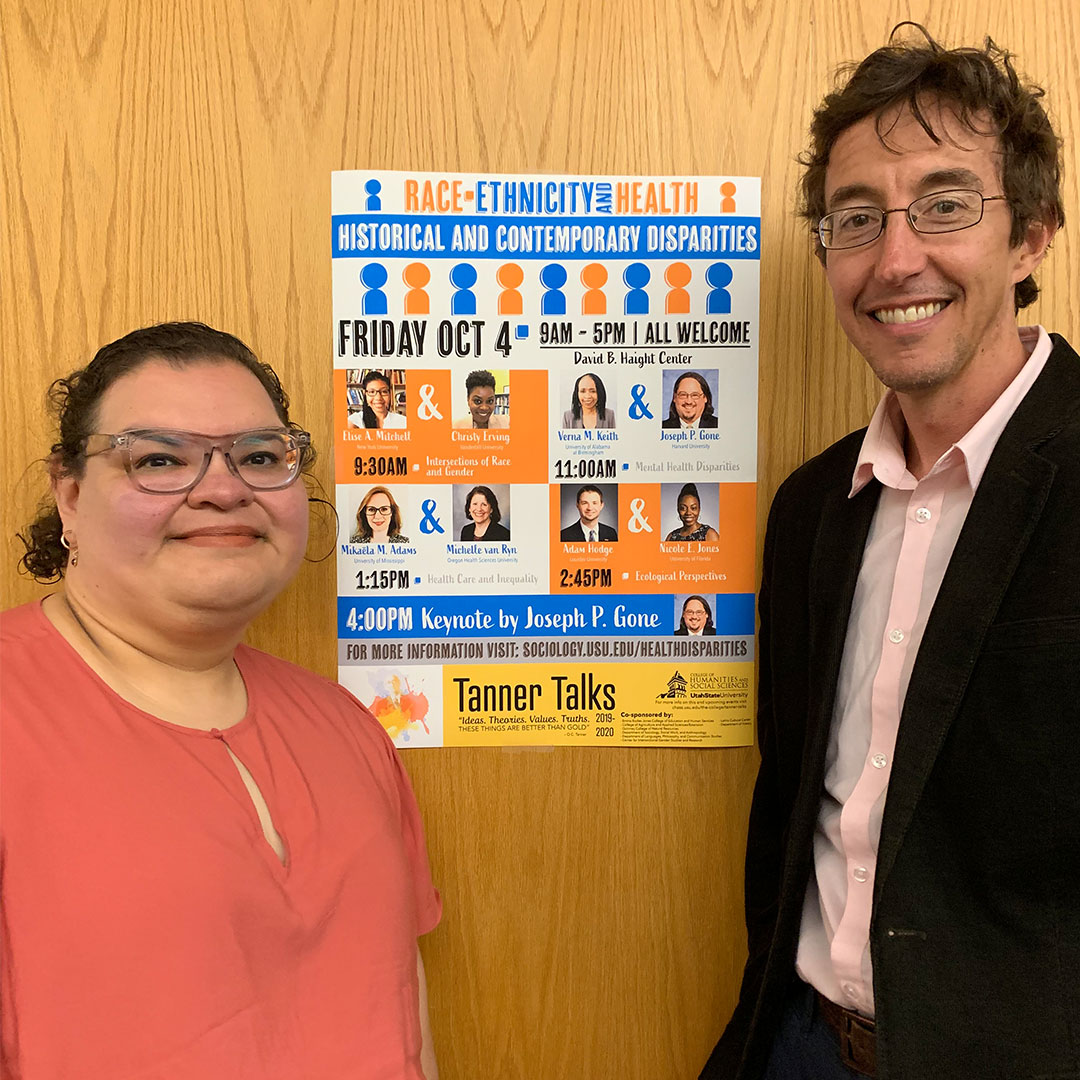 Guadalupe Marquez-Velarde is an assistant professor of sociology. Her research interests include health inequalities, race/ethnicity and demography. Her current research focuses on health inequalities among Latinxs, immigrants, and LGBTQ+ populations. Seth Archer is a cultural and environmental historian of North America with particular interest in Native American and Indigenous history to 1900. He is the author of Sharks upon the Land: Colonialism, Indigenous Health, and Culture in Hawai‘i, 1778–1855 (Cambridge University Press, 2018).

On October 4th, you’re co-hosting a day-long seminar titled “Race, Ethnicity, and Health: Historical and Contemporary Disparities.” Can you talk a little about how this collaboration came about and why you decided to host this important event together?

Credit goes to CHaSS Dean Joe Ward. After we each presented at the meet-the-faculty lunch series in Fall 2018, Dean Ward noticed that one of us works on health disparities in contemporary society (Guadalupe) and the other studies the phenomenon historically (Seth). A lot of lip service is paid in the academy to interdisciplinary and cross-disciplinary work, but it remains fairly uncommon; Dean Ward aims to make it a central feature of the work we do in CHaSS. When the two of us met for initial planning, we found that the Dean’s hunch was correct: our research and teaching overlapped in interesting ways. Even the contrasts—quantitative vs. qualitative methods, for example—could be used to our advantage as a team. We also found that we got along well. A Tanner Talk was born!

The event is sponsored by the O. C. Tanner Foundation with additional support from the Emma Eccles Jones College of Education and Human Services; the College of Agriculture and Applied Sciences/Extension; Quinney College of Natural Resources; the Latinx Cultural Center; the Center for Intersectional Gender Studies and Research; the Department of Sociology, Social Work, and Anthropology; the Department of History; and the Department of Languages, Philosophy, and Communication Studies. Given all these supporters, it seems like you’ve touched a nerve. Have you been surprised by the support and encouragement you’ve received from so many departments? Why do you think there’s so much interest in this topic now?

We are surprised and very grateful for the support. The prospect of raising money scared us a bit; but we encountered open doors and encouragement all over campus. Fundraising also introduced us to various people and departments who are interested in health disparities. We benefit from being at a university where a number of faculty work on issues related to race, social inequality, and health. The symposium also overlaps with USU President Noelle Cockett’s initiatives on Diversity and Inclusion, Mental Health, and Aggies Think, Care, Act, which help to put the subject of health disparities on the campus radar.

Equally impressive is the roster of speakers and presenters you’ve put together. You have panels on Intersections of Race and Gender, Mental Health Disparities, Health Care and Inequality, and Ecological Perspectives. Could you describe what you hope to achieve by bringing together this particular group of people to talk about these topics?

Like other forms of inequality, health disparities have been constant in American society since before the founding of the nation. The exchange of plants, animals, and microbes between Afro-Eurasia and the Americas after 1492 was profoundly lopsided in terms of infectious disease; colonial violence aside, the cost to Native American life was immeasurable, and some would argue that legacy persists. As social and economic inequality rise in the twenty-first century, health disparities increase alongside. There are countless examples, from African-African maternal mortality to heart disease and diabetes in Native American populations. Our current fee-for-service health care system and profit-driven medical research are generally not equipped to trace either the origins or persistent causes of health disparities among marginalized groups. Our hope was that by pairing social scientists and historians, the conversation would be more revealing and generative than standard academic panels on the subject, while also offering an alternative to the typical policy debates around this chronic social problem.

You’ve also invited Joseph P. Gone to give the keynote on “American Indian Healing Traditions: Historical Shifts in Therapeutic Practices.” Why did you choose him as the keynote speaker?

Professor Gone is a unique scholar. Trained as a clinical psychologist, he has a joint appointment in the Department of Global Health and Social Medicine and the Department of Anthropology at Harvard University. He is an enrolled member of the Aaniiih-Gros Ventre tribal Nation of Montana. He has published over 75 articles and chapters on the subject of Native American mental health and well-being broadly. Did we mention that he is a peacetime veteran of the US Army and was a West Point cadet? As a social scientist, clinician, and scholar who works among Native American communities and researches historical trauma, Professor Gone seemed to us the ideal bridge between our various fields and the obvious choice for a keynote speaker. Native American faculty and students on campus are very much looking forward to his visit. He is a great Native role model in academia.

In addition to your own research projects focused on race, ethnicity, and health, you both teach classes on this topic. Can you tell me a little about the classes you teach?

SA: Like other faculty in the history department, I teach a wide range of classes, including a number of General Education courses. My teaching areas include early America and nineteenth-century U.S., environmental history, Native America, the American West, and the history of health, disease, and medicine.

Rumor has it you are co-teaching an Honors Think Tank in the spring. Can you tell me a little about this class?

Ask us when the symposium is over? Seriously, though, when Honors circulated the call-for-proposals, Guadalupe realized that we were well-suited to build an interdisciplinary course after planning this symposium. The result is HONR 3020: Health, Society, and Culture: Past and Present, to be offered in Spring 2020 and Spring 2021. Like the symposium, the course will pair work by historians with work by social scientists. Topics include epidemiology, race and class, disability, mental health, and health care systems.

The symposium is on Friday, October 4 from 9AM to 5PM in the David B. Haight Center.

This event is free and open to the public. All are welcome.

For more information, go to http://sociology.usu.edu/healthdisparities/