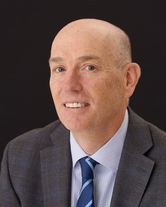 Colin Flint is a Distinguished Professor of Political Geography in the Department of Political Science at Utah State University. He serves as the director of the International Studies Program at Utah State University. Previously he was a Professor of Geography at University of Illinois at Urbana-Champaign, and Pennsylvania State University. He enjoys working with undergraduate students, and advises the Aggies Geopolitical Observatory project. He has published research in leading international journals on the topics of geopolitics, war and peace, world-systems analysis, and just war theory. Flint’s current focus is upon the interaction of economic and political processes in great power transitions. He is co-editor of the international journal Geopolitics. His books have global exposure and have been translated into Mandarin, Korean, Turkish, Japanese, Spanish, Polish, Arabic, and Farsi. His monograph Geopolitical Constructs: Mulberry Harbours, World War Two, and the Making of a Militarized Trans-Atlantic (Rowman & Littlefield, 2016) advances theoretical discussions of geopolitics through a new framework of structure and agency and introduces the term “geopolitical constructs.” He is the author of Introduction to Geopolitics, 3rd edition (Routledge, 2017) and co-author, with Peter J. Taylor of the foundational and renowned text Political Geography: World-Economy, Nation-State and Locality (Prentice Hall, 7th edition, 2018). He is editor of The Geography of War and Peace (Oxford University Press, 2004) and co-editor (with Scott Kirsch) of Reconstructing Conflict: Integrating War and Post-War Geographies (Ashgate, 2011). While Director of the Program in Arms Control, Disarmament, and International Security at the University of Illinois at Urbana-Champaign he was principal investigator for a $450,000 grant from the John D. and Catherine T. MacArthur Foundation on the project entitled “Security Policy Formation: Bringing Scientific Expertise and Dialogue to Policymaker.”