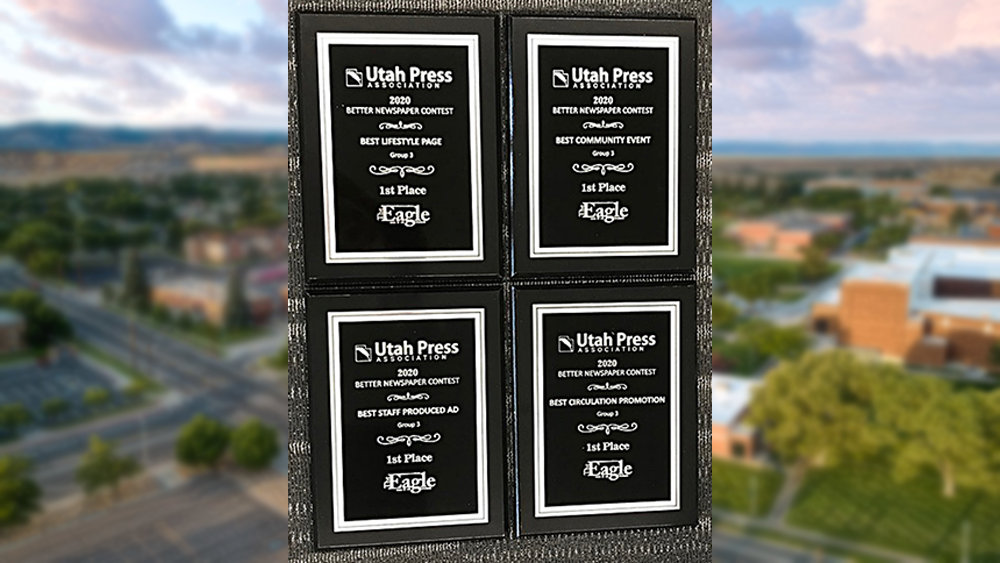 Even in the midst of COVID-19 restrictions, Utah State University Eastern’s “The Eagle” student newspaper continued to publish and won 21 awards at the Utah Press Association’s annual Better Newspaper Contest in June.

“I am always proud of my student’s work,” said The Eagle advisor Dr. Susan Polster. “They do well against all the other universities in the state in this contest.”

The Eagle editor Cody Phelps wrote a story on “Eastern Campus Improvements” and won second place for Best News Coverage. He also won second place for a photo he snapped with his cell phone of the yellow, thick air surrounding campus from all the fires burning throughout Utah during the first week of classes fall semester. Phelps’ final second-place award was for a story he wrote about Price City and USU Eastern teaming together to light up the way with the new signage placed throughout the community. He accompanied the story with infographics that helped him win Best Infographics in the newspaper.

The second-place Best Photo Page was designed by Anderson with Levan Hall taking the photos. It was titled, “Mommas Don’t Let Your Babies Grow Up to Be Cowboys” and featured photos of the USU Eastern’s rodeo. Anderson also won second place for Best Sports Page design for Fan Appreciation Night in February 2020.

In addition, Hall won second place for Best Sports Photograph of a cowboy being bucked off his horse during fall semester’s USU Eastern rodeo. He won another second-place award in the Best Feature Photograph series for a photo of a student creating a colorful art design with liquid paints.

Sara Morley won third place in the Best Education Story category for her story about the nursing department’s 100% pass rate.

Anderson’s final award was a third-place plaque from the Harrison R. Merrill’s sponsor of Best Front Page Design for the Sept. 11, 2020 edition.

“The Eagle” editor Cody Phelps’ fourth award was his campus coverage of the COVID-19 pandemic throughout 2020.  He won third place for his series.

The Eagle staff’s final awards were the third places for Best In-House Promotion of “Before They Fly Away, Grab One Today,” and Best Website Design by Les Bowen.