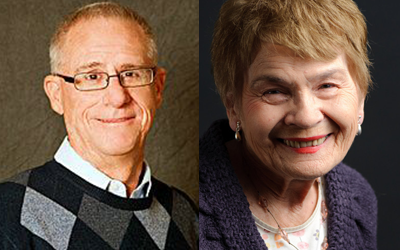 Both have been with KNVU and other Cache Valley Media Group stations for 45 years, and are familiar voices to Northern Utah listeners. Christensen is known for her early morning reports on local government and community events.

Lewis is the “Voice of the Aggies,” and also is an early morning radio host, providing news, weather and sports reports.

“We are honored to add these two to our Hall of Fame,” said Michele Zabriskie, UBA president. “They both are classic examples of what local broadcasting is all about, reporting on and serving their local communities.”

The induction will take place May 25, 2017 beginning at 5 p.m. at the Riverwoods Conference Center in Logan.

“It has been a joy and a pleasure to come to work each day and see Al and Jennie consistently working hard at their craft,” said Kent Frandsen, president and CEO of Cache Valley Media Group. “They have been consummate professionals and elevate our entire company with their professionalism and connections to the community.”

Jennie Christensen has been with KVNU for 45 years this spring. She turned 87 years old in January and still starts work every day at 4:30 a.m. to produce news for the Cache Valley Media Group.

Her stories, prepared for radio, also appear on CacheValleyDaily.com. She religiously attends city and county council meetings in the evening. She is well known by numerous political and community leaders.

“To have the connections and reputation she enjoys among political and community leaders, plus the loyalty of so many listeners demonstrate her professionalism,” Zabriskie said.

She has been recognized as a Citizen of the Year by Logan City, as a Homecoming Grand Marshal by Utah State University, and has received numerous other awards from civic and non-profit organizations for her untiring devotion to quality journalism and shedding a light on important topics in our community.

Sports has always been Lewis’s passion. He was a long-time play-by-play voice of the Logan High Grizzlies and at one time even called play-by-play of a community baseball team. He is unquestionably best known for his love of the Utah State Aggies. This season Al called his 1,000thAggie broadcast and was honored during the game with a special plaque from USU.

Not only is Al the voice of the Aggies, but he is the voice people wake up to when people want to know what is going on in their community. He has been the morning host of KVNU for decades, and delivers news, weather and sports updates every morning. He is often asked to emcee special events in the community when people know they want a seasoned pro.

“We would be justified in inducting Al twice, for his play-by-play skills, and for his long tenure as a morning host,” Zabriskie said. “To excel as he does in both areas is to his credit.”

“We couldn’t be more pleased to have the Utah Broadcasters Association recognize Al and Jennie,” Frandsen said. “We can’t imagine two professionals in this business who would be more deserving. And we’re excited to share their recognition with the public. We hope people will turn out and thank them for their decades of service.”