With only an airport carry-on and a garment bag for his suit, Utah State University journalism professor Brian Champagne spent this past Sunday morning in a Phoenix airport wondering how he was going to get 12 clunky Emmy award statues onto his flight and back to Logan.

It wasn’t ideal, but Champagne found a solution.

He crammed the awards in two cardboard boxes, which Southwest Airlines employees then bound together, painstakingly, with masking tape. The boxes were dressed in another layer of tape when they went through airport security, leaving Champagne with the task of hauling them around the airport terminal.

None of it, however, overshadowed the excitement of seeing his students succeed. He had just attended the Rocky Mountain Southwest Chapter Emmy Awards the night before where USU’s own A-TV News won an award for a newscast that aired in March.

“We got a batch of students in there who really wanted it — who wanted to practice good journalism,” Champagne said.

To Champagne’s knowledge, it was the first Emmy a USU broadcast production had won, and certainly the first since he started teaching at the university.

The award, he said, was unexpected. 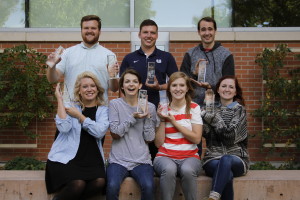 “I had no way of getting it home,” Champagne said. “That’s how much I expected it.”

Student Emmy awards are given to individual students and broadcast organizations based on a scale devised by the National Academy of Television Arts and Sciences that examines “content, creativity and execution.” Emmys are awarded in a variety of categories, and they recognize both high school and university students. USU’s A-TV News was one of two broadcast organizations honored in the College/University Student Production-Newscast category — the other was Arizona State University’s Cronkite News.

Emily Duke, a senior at USU studying journalism, said she was ecstatic when she learned her and her fellow students’ production had won an Emmy award. Although her feelings didn’t quite set in, she said, until she held the award statue.

“It was such a good feeling,” Duke said. “I knew we had been nominated and that Brian was going, but I didn’t really fully comprehend it until he started handing out statues.”

In addition to A-TV News’ award, USU alumnus Jeffrey Dahdah won an individual award for his video essay “Wheelchair Dancer,” which profiled a woman who, though confined to a wheelchair by paralysis, found freedom and movement in a ballroom dance class.

Having been recognized by the Region 9 chapter of the Society of Professional Journalism earlier in the year, the Emmy was Dahdah’s second award for his video essay.

Being honored twice was flattering, Dahdah said, and all three awards — A-TV News’ award, which he was part of, and his individual awards — speak to the quality of the university’s journalism program.

“It says a lot more about the program,” Dahdah said. “I’m just a product of that.”

Champagne expanded on Dahdah’s point. To him, much of the award belongs to his journalism department colleagues Cathy Bullock, Candi Carter Olson and Matthew LaPlante. They, he said, laid a foundation for him and his students to build on.

“The class we teach I consider the frosting class,” Champagne said. “Those other classes — those are flour and yeast classes.”

Winning awards like an Emmy, Champagne said, is something that he hopes becomes a regular thing. And for now, his eyes and those of the individuals in the journalism department — both students and faculty — are set to the future and further successes that may come.