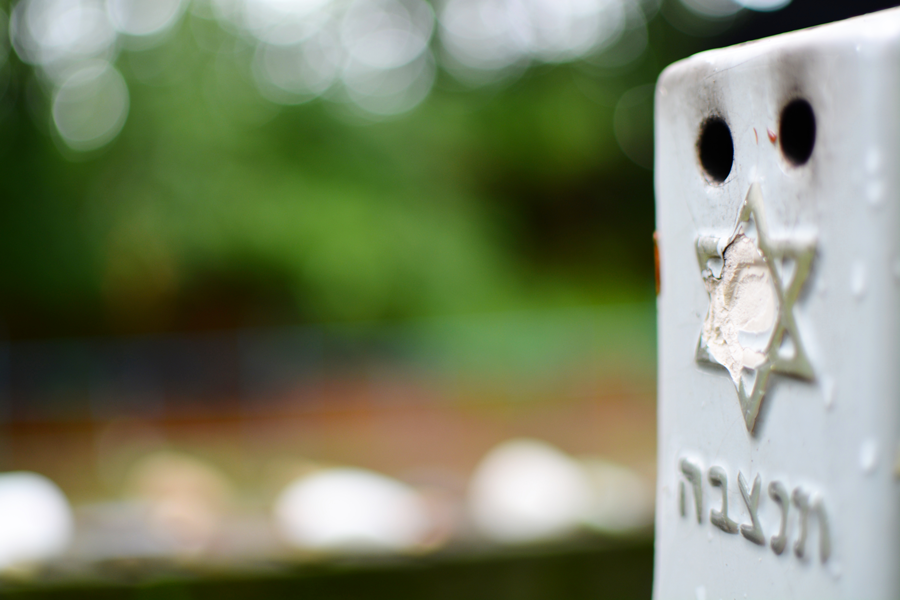 A silent marker to distinguish a mass grave in a forest killing field outsideTarnow, Poland. It was one of many stops made by historian Jonathan Brunstedt in his travels to create a curriculum for a new course on the Holocaust. (Photo courtesy of Jonathan Brunstedt)

It’s taken Jonathan Brunstedt until now to reach beyond the horror of the Holocaust.

Horrors like standing in the gas chamber at Majdanek. The horror of a child-sized marker rising from dandelions and moss to mark a mass grave in a forest killing field outside Tarnow, Poland. Or, most devastatingly, says Brunstedt, “going to death camp after death camp, killing site after killing site.”

This winter, an assistant professor of History, confronted those horrors as part of a scholarly group organized by George Washington University and the International March of the Living. In his journey, Europe became a “necropolis” of death and pain, “unimaginable trauma.”

“When I teach the Holocaust every semester during Western Civ, I always get stuck at that emotional place,” he said. “I give lectures. We do the readings. But I’m still stuck at that same place, thinking that it’s pure luck that my children were not born in a time and place where they could suffer persecution.”

Such fierce emotions can curtail learning. Brunstedt understands that, for students, "'once one breaks through the emotional wall, one sees the Holocaust is explainable. It can be grasped as a knowable event. The more young people come to terms with this, the greater chance that such an event will be prevented from happening again.”

Brunstedt recently returned from an excursion into the heart of the Holocaust with the goal of creating a curriculum for a course devoted entirely to the Holocaust. To prepare, he’s spent months meeting with scholars and Holocaust survivors, often at the Holocaust Memorial Museum in Washington, D.C.

“I was finally able to get past that emotional feeling that the Holocaust is too immense for students to internalize. That’s an important step to really being able to teach this stuff,” he says.

The Holocaust is covered by many History classes, he said. For instance, the event plays a central role in classes he teaches like Western Civilization and World War II in Europe. But there’s no dedicated course or program.

He was one of four scholars nationwide named as GWU/March of the Living Holocaust Faculty Fellows. The international foundation promotes education on the Holocaust and its history. In this first of a new program, MOTL handpicked a few faculty members throughout the country working at institutions that don’t currently have a Holocaust course or program.

The training began with a month at the Holocaust Memorial Museum in Washington, D.C., and then transitioned to Poland and such death camps as Auschwitz-Birkenau, Treblinka, and Majdanek.

For seven decades, we survivors have promised to “never forget.” But Brunstedt worries that younger generations may be doing that. One poll from mid-2018 found that 22 percent of millennial students had not heard of the Holocaust or weren’t sure they had.

“If you lose that historical memory, but more generally if people stop caring about those big ‘why’ questions of the historical process — like why did the Holocaust occur? — it’s dangerous,” he said.

Even focusing educational efforts on such survival narratives as “Shindler’s List” “misses the point that the Holocaust was something much, much more tragic,” he said. “And it’s really hard to get students to grasp that.”

Amid Brunstedt’s tour of death camps, the “reality and horror hit home” as he overlooked the charming, ancient town of Lublin, Poland. On the town’s outskirt is one of the largest concentration camps, Majdanek, which at the war’s end had a number of gas chambers, wooden gallows and ovens. Unlike Auschwitz-Birkenau, Majdanek is an almost fully intact death camp because the Soviets captured it before the Germans could destroy it

“It was actually adjacent to a major urban center; there must have been some awareness of what was going on,” he marvels.

His journey through the graves of World War II was not “morbid tourism,” he said, but a way to share the reality, personally experienced, in the classroom. “It’s hard to make it reality for students,” he says.

As a scholar of modern Europe and Russian history, said Brunstedt, “I’ve studied the Holocaust for many years, and I’ve seen all the worst photos you can imagine. But it never hit home to me until I had a child. Then, all of a sudden, I understood the Holocaust in a better way. Because for some reason, to that point it was still something of an abstraction.”

But not only is the Holocaust seen as an abstraction, said Brunstedt, it also carries a lot of historical baggage in the form of myths. For example, he says, Jews fought heroically during the war. “They weren’t just victims,” he said.

"As teachers of history, he added, “we must overcome the myths and actually look at the more complicated darker aspects of history. By doing that, it makes you a more empathetic human being.” The Soviet dissident Aleksandr Solzhenitsyn put it this way: "It's not possible to simply separate the evil people from the rest of us, since the line dividing good from evil runs through every human heart. And who is willing to destroy a piece of his own heart?"

Brunstedt wants his students to “take away the fact that this tendency to violence is not something that’s been erased forever from humanity.

How did humanity so fail the children?

Jonathan Brunstedt, an assistant professor of History, has extensively researched the Holocaust.

An estimated million and a half innocent children died as a direct consequence of Nazi actions. But, why?

After all, the Nazi death camp commanders had children themselves. In one photo, Hitler bends to caress the face of Helga, daughter of propaganda minister Joseph Goebbels.

“They didn’t see them as human,” says Jonathan Brunstedt, an assistant professor of History who’s creating a curriculum for a new course focusing exclusively on the Holocaust. “Keep in mind that a lot of the top Nazi people who were orchestrating this never had to kill a child. They had other people do it.”

Their rationalism was a extension of social Darwinism. In the Middle ages, a conversion to Christianity could prevent a Jew’s death. Jewish was defined as a belief system, a religion. “You could be Jewish but you could actually convert to Christianity and you’re no longer Jewish,” he said.

But in the 19th century, the concept of ethnicities and “biological races” gained prominence, changing the very definition of Jewishness. So Jews are no longer just believers in the Jewish faith, now they’re a biological race; from a child to adult, you are Jewish no matter what, because it’s in your blood.”

That led to the invented concept of superior races. Nazis used this social Darwinism and brought it into the mid 20th century.

We focused on how antisemitism under the Nazis was different than, say, antisemitism in MLK’s day. You can ask, why didn’t the Holocaust happen earlier. But a big precondition is this actual definition of what it means to be Jewish.”

(In a bitter historical epilogue, Helga Goebbels and her five siblings were poisoned with cyanide in the bunker that was Hitler’s last holdout on April 30, 1945. They ranged in age from 2 to 14.)