A Bridge to Self Discovery 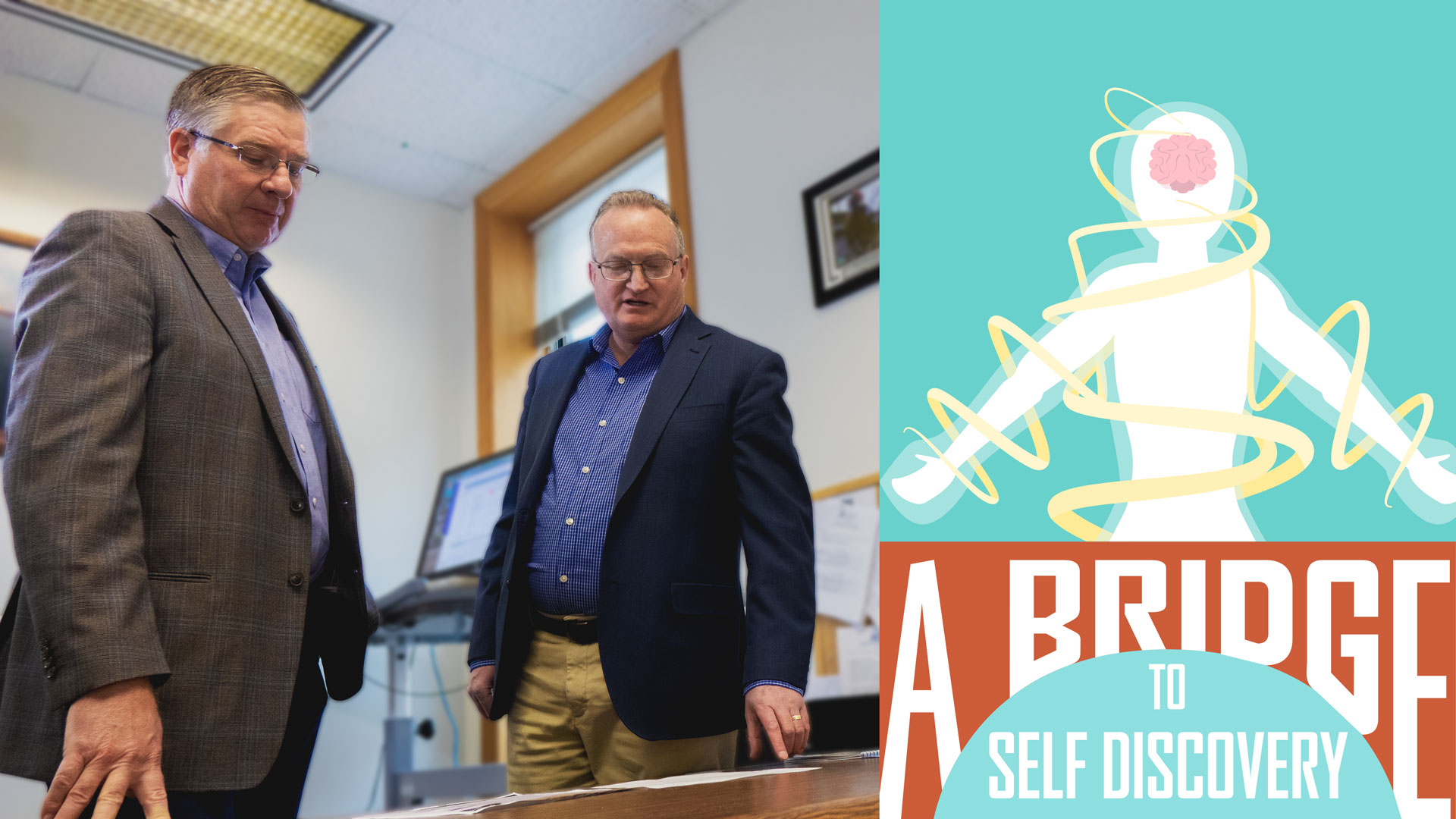 It’s Kevin Banks’s first week at Utah State University and there are books stacked everywhere in this small room on the third floor of Old Main. He’s forced to brush off a chair off for me to use.

Into this disorder walks Derrik Tollefson, department head for Sociology, Social Work and Anthropology, carrying two more boxes. He looks around for a clear spot on the floor.

And that was the problem. Convention.

Block’s mind-building bridging caught hold with only a handful of people -- in Blanding, Utah, of all places. Banks had pioneered the use of the concept within the population of domestic violence offenders he worked with as a clinical consultant. And that was enough to prompt the 80-year-old Block to turn to USU to house his vision of a center that would train therapists and undertake continued research. And, to get the first bricks laid, Block presented $2 million to establish the I-System Institute for Transdisciplinary Studies: Home of Mind Body Bridging. Banks will be its director.

As Block intended, said Tollefson, “We’re going to take it to the world.”

Mind-Body bridging is a social work modality — one of innumerable approaches available to counselors and therapists. But this approach — expansive and personal — is difficult to confine to words on a page. It fares much better in a real-life scenario. Because I have been given the chair of honor, I’ll be the guinea pig.

Sitting in the cluttered office, Banks draws an oval on a blank piece of paper and asks me to write within it a problem or situation that’s giving me grief. I don’t even need to hesitate: a 20-year-old son who seems to have put the brakes on his life, turning his bright energy, kindness and curiosity toward video games and surly purposelessness.

Next, Banks instructs me to write how I respond to that. I’m pretty sure the list included frustration, anger, regret. Maybe something about failing as a parent something else about a stone wall.

At Banks’s direction, I close my eyes, relax my shoulders, and just listen. Even in that quiet room, I pick up hurried steps down the hall, a burr of an air conditioner, a faraway squeal that could have come from a girl or dog. My shoulders drop another inch. I notice the soft fabric that’s covering my arms.

After a bit, I open my eyes and, at Banks’s prompting, I pick up the pen and write down what now comes to mind. I write just one word. Sadness.

Such deep sadness for a tampered spirit, for the loss of weeks, months.

What I’ve just tapped into, says Banks, is my “I”, the natural, empathetic me, whose love embraces my son, if he’d only allow it.

Mind-body bringing is based on the concept that one can’t heal without the other. Just as when we slice our finger on a knife, the cut turns into a scab and eventually the scab falls off. Our minds are built to heal in a similar way, said Banks. “This is called mind-body bridging because we bridge the two and we bring the two back in harmony and sync with one another,” he said. But what happens, he said, that our mind and our body start to work at odds with each other.” he said.

Each of us has what mind-body bridging calls an identity system. This process in our minds, said Banks, “causes us to over-identify with things because we take them on part of our identity.” Our identity gains baggage as we stop at every shiny store window.

What activates the identity system is what MBB calls a requirement, a mental rule that when violated activates the system. A mental rules is a bit like an expectation, he said. In my case, I had expectations for my son that were being thwarted. Why was he like this? Why is he wasting his life?

This identity system created by my fretting about my son was being stoked by two other explosive things.

First, “depressors” take the violated requirement and add disappointment, negativity and unhappiness, creating what Banks says are, “story lines.” These story lines play out over and over.

Then, the “fixer” enters the process. “And that fixer tries to make it all better,” said Banks. “But there’s one problem. The fixer can’t make it better because no matter what that fixer does, this depressor will never approve. It will never be good enough.”

The result, said Banks, “is just a vicious cycle of dysfunction in the mind-body state” that “tries to make you think you’re damaged. That ‘Yep, it’s my fault.’”

However, following my re centering resulting from the contemplation process, the loud, obnoxious identity system was diffused, and I move into a different mid-body state. “You’re functioning as you were intended to function,” said Banks. “You have a thought and you deal with it as best you can. You don’t try to control anything you have any control over and you recognize basically your response is the best I can do. In this mind-body state you’re empathetic and sad.”

He uses the analogy of a sponge. If you hold the sponge tightly in your hands, it only soaks up a bit of water. Removing the tight grip — or a depressor — allows the sponge to swell twice its size. “Look at how much room you have,” he says. “We become more expansive. It’s not the nature of the problem that’s changed, but your ability to deal with it. This is resilience.”

Block’s generosity allows the establishment at USU, specifically the College of Humanities and Social Sciences, of the institute, an intellectual and educational center. The institute has already received approval from USU’s Board of Trustees as well as Utah’s Board of Regents.

Initially, the institute will train master-level social workers who have all the licensure. Once they’re certified in the “I System” methods, they’re free to not only practice it themselves, but to train others. It will also be offered to bachelor-level substance abuse counselors who’ve been licensed by the state of Utah.

Already, three graduate-level courses have been added to Social Work’s curriculum. With Tollefson and Banks’s help, plans call for a center that will instruct social workers nationwide, which is only the start for an ambitious plan to conduct research and introduce mind-building bridging to public schools and even the business world.

As the institute grows, said Tollefson, “we see ourselves becoming essentially a research clinic on the campus where we’ll be doing mind-body bridging-related interventions and evaluating those interventions.”

Banks is the natural choice to nurture the new institute. He was introduced to the modality as a clinical consultant working with Tamsie Cooper. Ph.D., and the domestic violence offender treatment program at the San Juan County Jail. And he soon found success with the use of mind-body bridging among such populations as children and adults, as well as domestic violence and other offenders.

By then, Block, who practiced psychiatry in California and Maine, had been using the program for some 20 years. He had authored “Bridging the I System” and was on his second edition of “Come to Your Senses.”

Banks found in his work with addicts and offenders that he was stymied by their resistance to change and the unknown territory that comes with it. “We tend to glob onto things we know,” he said of the inmates. “And we become quite stuck. Eventually, our identity system not only defines us, it confines us.”

Domestic violence offenders replay a story line that tells them they’re not the one with the problem. Indeed, said Banks, “They think they’re the victim.”

The I-System offers long-term results for jailed offenders because, ironically, its point is that true change must come from inside a person. “The best solutions to any problem resides within the skin of the person who owns the problem,” said Banks. “When they get into their natural mind-body state, they see their solutions. And if they don’t, they’re able to have conversations to be able to see them.”

Banks even creates his own “maps” when he’s stressed or angry. “I know my identity system has become active when I have body tension and my mind is cluttered,” he said. When that story line begins to roll, he added, “that’s a signal to me that I’m off track. You need to address it and diffuse it, and get back to natural functioning.”

He’s sometimes asked why he even spends time working with terrible people who’ve done terrible things. But, he adds, shame is an ineffective way to change people.

“I look at the individual and say, ‘That’s not who they are’. When you help that person discover who they are, they’re wonderful,” he said. “I have yet to work with one person, abuser or non-abuser, that when they start to see who they truly are, who their natural functioning self is, is not a magnificent individual.”

Block and his wife, Carolyn Bryant Block, have a passion for “wanting good for the world,” said Tollefson. But they were unsure about putting together such a large vision and making it happen. “They truly want to help bless people’s lives,” he said.

Their mission, as defined by the Blocks, is to spread mind-body bridging concepts with the world. “We need to train clinicians who know how to practice it on the mental health side. We need to train teachers how to use it in their classrooms. We need to train students at universities and secondary and elementary schools to use it,” he said.

“If I was to put his mission in a nutshell, it would be to take mind-body bridging and share it with the world.”

More about the exciting and innovative efforts of the San Francisco-based nonprofit, Young Community Developers

As the institute grows, said Tollefson, “we see ourselves becoming essentially a research clinic on the campus where we’ll be doing mind-body bridging-related interventions and evaluating those interventions.”

Outreach to schools, the community, business:

A “Productive Mind” program designed for corporations and other facets of the business world.

Clinical training and certification in the Mind-Body Bridging methodology.