This Alaska Native finds a home for herself, and her culture.

Grad student Cana Itchuaqiyaq’s Inupiat culture exists primarily on a remote Alaskan peninsula above the Arctic Circle. But she carries remembrances with on her journeys. (Photography by Jeannie Thomas)

When Cana Uluak Itchuaqiyaq walks across the stage to accept her Ph.D. in spring 2021, she will dazzle and astonish. And teach.

Replacing her mortar board will be an intricately beaded Yup’ik headdress called a nasqurrun. On her feet will be soft, soundless, moose-hide mukluks. Both are exquisite standards of a culture — indigenous Alaskan — that is as American as fireworks and as unfamiliar to us as dark-less nights.

Alaskas Native are perhaps the least-represented Native Americans here in the Lower 48. Indeed, in an educational journey that’s taken her from California to Massachusetts, Cana says she’s never seen a faculty member quite like her.

Last spring, however, Utah State University revised its policy on commencement regalia to allow students to wear traditional cultural regalia. Cana, whose name is pronounced KAY-na OOH-loak it-CHO-key-yuck, will be the first in known history to not only graduate from USU as an Alaska Native, but to carry with her a part of her culture.

Her mother was the first to hear the good news. Her mother, who now lives in Anchorage, was delighted: “Oh! We’ll get you a parka and mukluks ….”

Still, there will be mukluks crafted by her mom who’ll also add beaded images of forget-me-nots. The delicate blossoms are Alaska’s state flower, as well as representative of USU’s blue.

“Part of wearing the regalia is bringing my ancestors with me and honoring my ancestors,” she said. “But I also want to honor Utah State. It’s also a part of my lineage.”

USU quietly changed its policy last fall to allow more flexibility with the traditional black robes. The policy requires students to wear the authorized caps and gowns because “each part of the regalia has a traditional meaning specific to your major field.”

The amendment, though, adds, “Objects of cultural significance are also welcome as approved regalia for ceremonies.”

The inclusion of USU’s many cultures was the idea of Cana, who first suggested such a change to university administration.

“Native Americans walking across that stage getting college degrees — what does that kind of representation do for young people wondering whether this is possible for them?” she asks.

"Part of wearing the regalia is bringing my ancestors with me and honoring my ancestors. But I also want to honor Utah State. It’s also a part of my lineage."

Cana, now age 42, was raised above the Arctic Circle in Kotzebue, a village that seems to jut precariously into the Chukchi Sea on the tip of a peninsula. Neighboring communities are reached only by plane or, in the cold months, snowmobile. In winter, children walk to school under dark skies, lighted only by a brief dusk. In summer, says Cana, kids play among the wild willows until early hours.

She describes her upbringing as traditional, with a diet of salmon, seal, and subsistence hunting and gathering. In winter, her family worked together to put away subsistence foods for the winter.

Among her 10 siblings, she said, three have earned degrees from universities in the contiguous United States. But she remains digitally connected to her culture and even the most remote relatives.

Indeed, it was on Native Twitter — her link to other Native people — that she was struck by a question from one poster: “If you could sit down with the president of your university, what would you ask of them?”

The tweet started trending and, because she tagged USU, administrators took notice. The process was welcomed and championed by Amanda DeRito, the university’s sexual misconduct information and outreach coordinator. Cana said she anticipated some resistance, so she was surprised when she heard: Tell us more why you would want this and why it’s important.

USU’s response, she said, “was swift and positive.”

Cana earned her bachelor’s from Harvard University and a master’s from Idaho State University. Here at USU, she is a doctoral student in the English Department’s Technical Communication, a program that scrutinizes the written word in instructions, websites, forms, rules and policy — things that ostensibly seem neutral.

“I look at those and see how they impact people,” she said. The USU commencement policy — and its neglect of non-traditional graduates — is a case in point.

“Technical Communication deeply influences reality,” she said. “It is not neutral. It shapes reality, it shapes response, and it can be used as evidence for or against something that may be oppressive.”

Technical Communication is taught across the country, but USU’s program is unusual in its approach. Its faculty are specialists in sussing out the ways official language may be unjust. Cana specifically chose USU because the program, she said, “is deeply invested” in social justice issues in the field of Technical Communications

“We look at all modes of media communication, whether it’s through technology or paper, that can create or perpetuate oppressive outcomes,” she said.

Also, she adds, most tech comm programs wrap up analysis when an issue is identified and explained.

“What USU Technical Communication offers — and I love this — is we go from critical inquiry to critical action,” she said. “So we identify the issues, but then we offer suggestions and correctives.”

This image of Cana Itchuaqiyaq’s niece, Cassidy Miligruak Aminiki Kramer, shows the style of traditional Iñupiat garb Cana will wear at her graduation. The cotton, pocketed Iñupiat dress is called atiqłuk, while the elaborately beaded Yup’ik headdress is called Nasqurrun. This photo of Cassidy was taken for the American Indian Achievement Awards at Colorado Christian University. Photo courtesy of Corina Kramer. 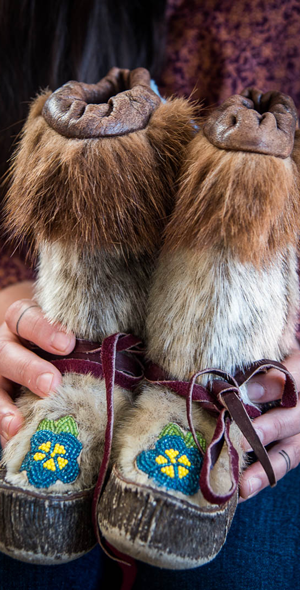 Cana still carries the mukluks her mother made for her as a child (bottom left). At her commencement in 2021, Cana will wear another pair crafted by her mother. The new pair, like the child-sized boots, will have hand-beaded forget-me-nots, which is the state flower of Alaska but also reflects Aggie blue.


Read more about Cana: Her journey of self-discovery that led her back to her own culture.

These are the questions Cana Uluak Itchuaqiyaq is asked regularly: “Are there still Eskimos?” And, “Did you grow up in an igloo?"

“People think we’re a myth,” says Cana, an Alaska Native. And, no on the igloos.

So, how to accurately and sensitively address Alaska Natives like Cana, who are Iñupiat? According to Cana, she self-identifies in general terms as an Alaska native.

The term Eskimo continues to be used, but it is considered to be derogatory. “It’s not a native word — it’s a colonizer word,” she said.

Iñuit is the self-identifier selected by northern tribes, she said, as they work to reclaim their culture. “Iñuit works for me,” said Cana. “But it’s a blanket term that still subsumes individual identities.”

As for Cana herself: “I prefer to use my tribal identity. I’m an Iñupiaq woman from the Iñupiat Tribe of NW Alaska.”